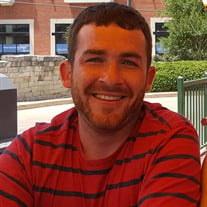 Aaron Wayne Kittle age 30 years departed this life on December 7th 2016 to join his Lord and Savior. Aaron was born October 29th 1986 in Elkins WV, a son of Gailord Ray Kittle, Dailey, WV and Mary Lee Phillips and husband Otto, Cody, Wyoming. In addition to his parents he is survived by his grandmother, Phyllis Jackson, Beverly, WV, brother, Nathan Ray Kittle and fiancé Deserae Ringler and their children Zoie, Croiz, and Madison Kittle. He is also survived by numerous aunts, uncles, and cousins. He was preceded in death by his grandfather Rev. Dr. Thomas W. Jackson, and grandparents; Daniel Ray Kittle and Ruby G. Moore. He made his home in Elkins WV and graduated in 2013 from Davis and Elkins College with a Bachelor of Science Degree in Management. Prior to attending Davis and Elkins College, he attended Glenville State College. Aaron enjoyed traveling and after spending time in Cody, Wyoming moved to a warmer climate he found in College Station, Texas where he was residing at the time of his passing. Aaron had a huge heart and an infectious smile and would help anyone in need. He loved spending time with his family and friends. He and his brother Nathan shared a close relationship and he enjoyed immensely the time spent with his nieces and nephews: Zoie, Croix, and Madison. He had a love for the outdoors, hunting, and his dog Billie. Aaron was a member of the Davis Memorial Presbyterian Church in Elkins WV and attended the A&M Methodist Church in College Station, Texas. At Aaron’s request his remains were cremated. A memorial service celebrating his life will take place at 11:00 am Saturday, January 14, 2017 at the Davis Memorial Presbyterian Church in Elkins. Rev. Kevin Starcher and Rev. Dr. Peter Vial will officiate and interment of the cremains will follow in the Beverly Cemetery at Beverly, WV. The Tomblyn Funeral Home of Elkins is in charge of the arrangements for Aaron Wayne Kittle. Condolences may be expressed to the family at www.tomblynfuneralhome.com.

The family of Aaron Wayne Kittle created this Life Tributes page to make it easy to share your memories.