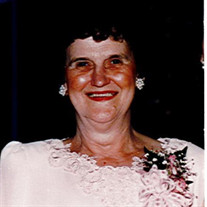 Adeline A. Paugh, age 94 years, a resident of Elkins, passed away Sunday, June 27, 2021 at Valentine’s Personal Care Home under the care of West Virginia Caring Hospice. She was born March 26, 1927 at Huttonsville, a daughter of the late William E. and Martha M. Gear Smith. On September 24, 1978 at Oakland, MD she was married to Kenneth Neal Paugh, Sr. who preceded her in death September 13, 2018. She is survived by six sons, Willard Joe Chenoweth and wife Pam of Parsons, Allen Chenoweth and wife Debbie, of Elkins, Gary Chenoweth and wife Marsha, Liberty Hill, TX, Michael Chenoweth and wife Susie Elkins, Jeff Chenoweth and wife Julie of Spring Hill, FL and Kevin Chenoweth of St. Clairsville, OH. One daughter, Sue Wingler of NC; twenty grandchildren, twenty one great grandchildren and two great-great grandchildren also survive. Also preceding her in death were one son, Robin Terry “Chico” Chenoweth; one daughter, Nancy Rogers; four brothers, Mack, Elmer, Ray and Robert Smith; two sisters, Virginia Tacy and Ilean Thompson and two grandchildren. Adeline was a homemaker and had worked at Davis and Elkins College prior to her retirement. She was a Methodist by faith. Friends may call from 6:00 pm until 8:00 pm Wednesday, June 30, 2021 at the Tomblyn Funeral Home in Elkins. A funeral service will be held at 10:00 am Thursday, July 1, 2021 from the funeral home chapel with Pastor Kevin Gainer officiating. Interment will follow in the Brick Church Cemetery near Huttonsville. Masks and social distancing are recommended for those attending the services. The Tomblyn Funeral Home of Elkins is in charge of the arrangements for Adeline A. Paugh. Condolences may be expressed to the family at www.tomblynfuneralhome.com.

Adeline A. Paugh, age 94 years, a resident of Elkins, passed away Sunday, June 27, 2021 at Valentine&#8217;s Personal Care Home under the care of West Virginia Caring Hospice. She was born March 26, 1927 at Huttonsville, a daughter of the late... View Obituary & Service Information

The family of Adeline Paugh created this Life Tributes page to make it easy to share your memories.