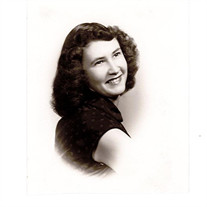 Agnes Jean Valentine Hale, age 88 years, a resident of Elkins, passed away Thursday morning, July 8, 2021 at Ruby Memorial Hospital in Morgantown, WV. She was born August 1, 1932 at Elkins, a daughter of the late Henry C. and Ollie Marie Chenoweth Valentine. On October 24, 1952 in Elkins, she was married to Donald Gene Hale who preceded her in death April 3, 2001. She is survived by two sons, Rocky E. Hale and companion Sandy Vandevender and Donald “Donnie” Hale and wife Dawn all of Elkins; one daughter, Donna Jean Sycafoose and husband Glenn of Beverly and two brothers, William Valentine and wife Elaine of Elkins and Jack Valentine of Belington. Also surviving are two granddaughters, Carla Hale and Angela Sycafoose Matthews and husband Ted, one great granddaughter, Emma Justine Matthews, several nieces and nephews and Haley Flint whom she considered a “special granddaughter”. Also preceding her in death was one brother, Tom Valentine and two sisters, Inabelle Clark and Betty Lambert. Jean was a graduate of Elkins High School and a homemaker. Friends may call from 6:00 pm until 8:00 pm Monday, July 12, 2021 at the Tomblyn Funeral Home in Elkins. A funeral service will be held at 11:00 am Tuesday, July 13th from the funeral home chapel with Bishop Jamie Estep officiating. Interment will follow in the Mountain State Memorial Gardens near Gilman. Memorial contributions may be made to the American Diabetes Association, West Virginia Affiliate, PO Box 115, Dunbar, WV 25064 in memory of Mrs. Hale. The Tomblyn Funeral Home of Elkins is in charge of the arrangements for Agnes Jean Valentine Hale. Condolences may be expressed to the family at www.tomblynfuneralhome.com.

The family of Agnes Jean Hale created this Life Tributes page to make it easy to share your memories.