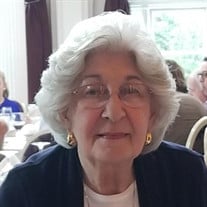 Ann Lockridge Cain, age 80, passed away suddenly on Wednesday, September 15, 2021, after spending time with friends and family in Virginia. She was born Ann Barlow Lockridge in Marlinton, WV to Opal and Ransom Lockridge on March 17, 1941. After graduating from Wilson Memorial High School in Staunton, VA, she attended Davis and Elkins College School of Nursing and later graduated from Shepherd College in Shepherdstown, WV. On December 26, 1959, she was united in marriage to James Fielding Cain and they were married for 51 years. They had two sons, James “Mike” and Patrick. She was preceded in death by her parents, her husband, and her brother, Ray Lockridge. Also preceding her in death were Jim’s parent John and Marie Bish Cain, brothers-in-law John and Tom Cain, and sister-in-law, Mary Cain. Ann was a loving, kind, and joyful person who welcomed and cared for everyone she met. She could make a friend after the briefest contact and had a curiosity about life. She explored many hobbies and interests including costume design, ceramics, and doll-making. She had a passion for dressage and was a generous teacher and coach in this sport. One of her proudest achievements was graduating college in 1996 at the age of 55. She continued skiing with her family into her 60s and loved spending as much time as possible with her sons, their families, and her six grandchildren, Sean, Keely, Lauren, Jaime, Brendan and Erin. She loved her horses and her Irish setters. She was a devout Catholic and a pillar of St. Brendan’s Roman Catholic Church in Elkins, WV. She will be missed by everyone who was blessed enough to have met her. She is survived by her sons, her grandchildren, daughters-in-law Aimee and Kristen, sister-in-law Carol Lockridge, nieces Marissa Lockridge and Sarah Donlevy, nephew Tim Lockridge, and cousins Bill Taylor, Anne Sautter, Lennis Lockridge, Carol Burns. Friends may call from 5:00 pm until 7:00 pm Monday, September 20, 2021 at Saint Brendan Catholic Church in Elkins with a Vigil Service being held at 6:30 pm from the church with Rev. Mr. Raymond Godwin officiating. A Mass of Christian Burial will be celebrated at 1:00 pm Tuesday, September 21, 2021 from the church with Father James E. O’Connor as the Celebrant. Interment will follow in the Saint Brendan Cemetery. Masks and social distancing are required for anyone attending the services. Memorial contributions may be made to Saint Brendan Catholic Church, 181 St. Brendan Drive, Elkins, WV 26241 in memory of Ann. The Tomblyn Funeral Home of Elkins is in charge of the arrangements for Ann Lockridge Cain. Condolences may be expressed to the family at www.tomblynfuneralhome.com.

Ann Lockridge Cain, age 80, passed away suddenly on Wednesday, September 15, 2021, after spending time with friends and family in Virginia. She was born Ann Barlow Lockridge in Marlinton, WV to Opal and Ransom Lockridge on March 17, 1941. After... View Obituary & Service Information

The family of Ann Lockridge Cain created this Life Tributes page to make it easy to share your memories.