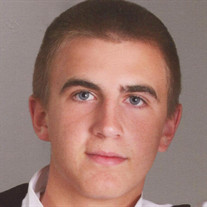 Austen Wesley Moore died Saturday, Aug. 25, at his home in Charlotte, N.C. He was 27. Austen was born in Morgantown, W.Va., on April 19, 1991, to Debbie Fragale (née Payne) and Mark Moore. Austen loved sports from an early age and played basketball throughout his childhood in Elkins, following in the footsteps of his grandfather, Carl Payne, who was a member of the Davis & Elkins College basketball team known as the Iron Five from 1948-50. After his family moved to Richmond, Va., Austen attended Cosby High School, where he played basketball in 2007 and 2008. Austen played on the Elkins High School Varsity Basketball team from 2008 to 2009 when he graduated. Austen went on to attend West Virginia University, graduating in 2014 with a bachelor’s degree in sports management and a minor in communications. During his time at his beloved WVU, Austen was a sports fan who enjoyed attending numerous football and basket-ball games. While in college, he worked as an intern for the Western & Southern Open professional tennis tournament and at the New Orleans Saints training camp in White Sulphur Springs, W.Va. Austen was also a fan of the Philadelphia Eagles and 76ers. Pursuing his dream to work in the sports industry, Austen took a marketing position with the NBA’s Charlotte Hornets in 2017. He quickly became popular in the organization for his personality and work ethic and received both Employee of the Month and Rookie of the Year awards. Austen was well-known in Elkins and considered a caring and charismatic young man. He collected loyal friends everywhere he went. He is survived by his maternal grandmother, Dr. Gloria Payne (née Marquette), professor emerita, who was Davis & Elkins College’s longest-serving educator with 71 years and is the James S. McDonnell Lifetime Chair in Business and Economics. Austen also is survived by his paternal grandmother, Shirley Moore, of Wheeling, W.Va., as well as his mother and father; their spouses, Dean Fragale and Tina Moore; half-brother, David Moore; and many loving aunts, uncles and cousins. The family will receive friends from 4:00 pm until 8:00 pm Friday, August 31, 2018 at Saint Brendan Catholic Church in Elkins. A Mass of Christian Burial will be celebrated at 11:00 am Saturday, September 1, 2018 at Saint Brendan Catholic Church with Father James O’Connor as the Celebrant. Interment will follow in Saint Brendan Cemetery. The family has requested contributions be made to Davis and Elkins College, 100 Campus Drive, Elkins, WV 26241 or to a charity of choice in memory of Austen. The Tomblyn Funeral Home of Elkins is in charge of the arrangements for Austen Wesley Moore. Condolences may be expressed to the family at www.tomblynfuneralhome.com.

The family of Austen Wesley Moore created this Life Tributes page to make it easy to share your memories.