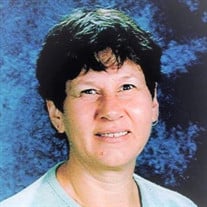 Barbara Louise (Voss) Hornbeck, age 72 years, a former resident of Valley Bend and a resident of Fairmont, WV, passed away Tuesday, July 27, 2021 at the Fairmont Medical Center in Fairmont, WV. She had been in declining health but death was unexpected. She was born June 29, 1949 in Chicago, IL a daughter of the late Edward A. and Ercilla R. Weber Voss. On December 26, 1973 at Valley Bend, she was united in marriage to Terry L. Hornbeck who survives at Fairmont, WV. Also surviving are her children, Brian S. Hornbeck and wife Loretta of Myersville, MD and Jessica M. Jordan and husband Sander of Fairmont, WV; three grandsons, Jonathan Hornbeck of Culpeper, VA, Bradley Hornbeck (in Heaven) and Noah Hornbeck of Myersville, MD; three granddaughters Sophia, Claira and Addison Jordan, all of Fairmont, WV. One great grandson Asher Hornbeck of Culpeper, VA. Sisters Roberta Voss of Wauwatosa, WI and Cynthia Kappelman and husband Steve of Scottsdale, AZ. In-laws David and Julia Hornbeck of Austell, GA and Steve and Shirlee Coffman of Montrose, WV. Nieces, Melissa Jones of AZ and Victoria Hornbeck of GA and Nephew, Michael Kappelman of AZ. In addition to her grandson Bradley, she was preceded in death by her in-laws, Dellot and Leota Hornbeck. Barbara was a graduate of Stout State University in Menomonie, WI in Early Childhood Education. She taught many years in Randolph County Schools, primarily teaching kindergarten in; Montrose, Whitmer, Valley Head, Pickens and Homestead where she taught most of her career. After retirement, she used her love of flowers working at local florists. She continued her love of knitting baby blankets and booties and dabbled in weaving, bead jewelry, paper marbling, beeswax ornaments/candles, and photography. Journal writing became a daily habit in her grateful journal. She was an avid reader often planning trips to many places within those books, also enjoying inspirational books that gave insight to being a better person. She shared an interest in family history with Terry; enjoying adventures to re-discover the paths of those before her. She enjoyed spending time with her grandchildren, taking them on summer day trips to Historical places and picnics. After moving to Fairmont she was kept busy with the grand girls as she called them. She volunteered with the read aloud program in their classrooms and then continuing to read in the preschooler classrooms, which held a special place in her heart, at Watson and Monogah Elementary. She adopted "older" people in her neighborhood; visiting, baking, and giving flowers to brighten the day. Her love of nature will carry on through what she has taught us and the memories we will cherish. Friends may call from 10:00 am until 12:00 pm Monday, August 2, 2021 at the Tomblyn Funeral Home in Elkins. A funeral service will be at 12:00 pm Monday with Pastor Ann Fretwell officiating. Interment will follow in Mountain State Memorial Gardens at Gilman. The Tomblyn Funeral Home of Elkins is in charge of the arrangements for Barbara Louise (Voss) Hornbeck. Condolences may be expressed to the family at www.tomblynfuneralhome.com.

Barbara Louise (Voss) Hornbeck, age 72 years, a former resident of Valley Bend and a resident of Fairmont, WV, passed away Tuesday, July 27, 2021 at the Fairmont Medical Center in Fairmont, WV. She had been in declining health but death was... View Obituary & Service Information

The family of Barbara L. Hornbeck created this Life Tributes page to make it easy to share your memories.