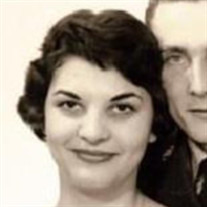 Barbara Sue Harman Lambert went to be with her Lord on Tuesday, May 19, 2020 in Elkins, WV, she was formerly of Brunswick, MD. She was the oldest child of the late Harry William and Mary Helen Raines Harman and the wife of the late Ronald B. Lambert for fifty one years. She was born in her family home in Harman, WV on May 22, 1940, and died just shy of her 80th birthday. She graduated as Valedictorian from Harman High School with the Class of 1958. She attended Potomac State University until she married. They moved to Brunswick in 1973 where they raised their children. Barbara was a Brownie and Girl Scout Leader and worked as a teacher’s aide at Brunswick Elementary School. She then worked at JC Penney’s and F & M Bank until her retirement. Barbara was a member of the Harman Church of the Brethren and charter member of Faith Baptist Church in Petersville, MD. She sang in the choir and enjoyed playing the piano for the Youth Choir. She also collected offerings and did bookkeeping, serving the church meant a lot to her. Most of all she loved being with her family and friends. She is survived by her children, Ronda D. Lambert and husband Ken Henkel of Jefferson, MD, David H. Lambert and wife Laurie and Darla L. Schiffhauer and husband Clint of Harpers Ferry, WV; and her grandchildren, Zachary H. Lambert who is a member of the West Virginia Air National Guard and fiancé’ Jamie Jones of Harpers Ferry, WV, Alycia J. Lambert of Morgantown, WV, Owen W. Schiffhauer of Harpers Ferry, WV and Blair J. Schiffhauer serving in the United States Air Force in Tucson, AZ. She is also survived by her brother Joe Harman and wife Reva of Canaan Valley, WV, sister-in-law Jean Harman of Elkins, brother-in-law Donald Lambert and wife Maureen of Great Falls, VA, her good friends Sandy Cox, Cathy Stull and Helen Arbogast and many cousins, nieces and nephews. Also preceding her in death were her grandparents, brother Blair Harman, niece Cheryl Jean Harman and many aunts, uncles and cousins who were very dear to her along with her dear friends Carol Marceron and Trudy White. The family would like to thank all the Home Care Staff that have helped in Barbara’s care over the past several weeks. A memorial service will be held at a later date. In lieu of flowers, the family suggests that memorial contributions be made to the charity or church of choice in memory of Barbara. The Tomblyn Funeral Home of Elkins is in charge of the arrangements for Barbara Sue Harman Lambert. Condolences may be expressed to the family at www.tomblynfuneralhome.com.

Barbara Sue Harman Lambert went to be with her Lord on Tuesday, May 19, 2020 in Elkins, WV, she was formerly of Brunswick, MD. She was the oldest child of the late Harry William and Mary Helen Raines Harman and the wife of the late Ronald B.... View Obituary & Service Information

The family of Barbara Harman Lambert created this Life Tributes page to make it easy to share your memories.

Barbara Sue Harman Lambert went to be with her Lord on Tuesday,...