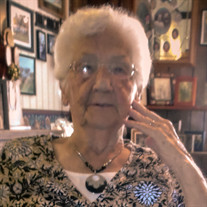 Bertha Jeanne (Sutton) Williams, age 91 years, a resident of East Dailey, WV passed away Saturday, March 3, 2018 at the home of her daughter, Constance Shaw in Silver Spring, MD. She was born January 14, 1927 at Helvetia, a daughter of the late William and Armeda Miller Sutton. On October 20, 1946 at Helvetia, she was married to Oliver “Red” Williams, Jr. who preceded her in death November 5, 2015. She is survived by two sons, Robert Williams of White Post, VA and Stephen Williams of Beverly, WV; two daughters, Margaret Thomas of Frostburg, MD and Constance Shaw of Silver Spring, MD. Also surviving are two brothers, Joe Sutton of Clarksburg, WV and Leonard Sutton of Gallipolis, OH, two sisters, Jessie Summerfield of Rawlings, MD and Rosie Dulaney of Pickens, WV, eleven grandchildren, and eleven great-grandchildren. Also preceding her in death were one son, David Ray Williams; one sister, Betty Hicks and two brothers, George William Sutton and Franklin Sutton. Jeanne was a homemaker and had been a twenty five year 4-H Club leader. She was a member of the Valley Bend Presbyterian Church, an Elder of the church, held the office of President, and held other offices for the Presbyterian Women of the Church. She volunteered for the Pickens Improvement Historical Society for other 30 years with the Maple Syrup Festival. Friends may call from 6:00 pm until 8:00 pm Thursday, March 8, 2018 at the Tomblyn Funeral Home in Elkins. A funeral service will be held at 11:00 am Friday, March 9th from the funeral home chapel with Pastor Ann Fretwell officiating. Interment will follow in the Pickens Cemetery near Pickens, WV Memorial contributions may be made to Pickens Improvement Historical Society, Pickens, WV 26230 in memory of Mrs. Williams. The Tomblyn Funeral Home of Elkins is in charge of the arrangements for Bertha Jeanne (Sutton) Williams. Condolences may be expressed to the family at www.tomblynfuneralhome.com.

Bertha Jeanne (Sutton) Williams, age 91 years, a resident of East Dailey, WV passed away Saturday, March 3, 2018 at the home of her daughter, Constance Shaw in Silver Spring, MD. She was born January 14, 1927 at Helvetia, a daughter of the... View Obituary & Service Information

The family of Bertha Jeanne Williams created this Life Tributes page to make it easy to share your memories.