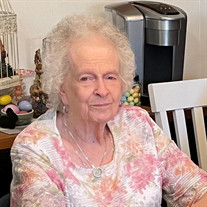 Betty Jo Hendon, age 90 years, a resident of the Elkins Manor passed away Tuesday, January 25, 2022 in the Davis Medical Center. She was born January 27, 1931 in Atlanta, GA, a daughter of the late Claude and Margaret Courtney Bostwick. She was married to Bobby Ray Hendon, Sr., who preceded her in death. She is survived by one son, Bobby R. Hendon, Jr., and wife Felicia of Norton; two daughters, Pamala J. Kiser and husband John of Roanoke, VA and Donna Schoolcraft and husband Robert of Conover, NC. One sister, Patricia Reynolds of McDonougha, GA, eight grandchildren, Brian, Eric and Shannon Hendon, Lori Flynn, Richard Kiser, Kelly Blankenship, Ericka Garrett and Haylee Bennett; seventeen grandchildren; two great-great grandchildren and a host of nieces and nephews also survive. Also preceding her in death were two sons, Randy and Danny Hendon; one brother, William Bostwick and one sister, Mary Hanson. Betty was a homemaker, enjoyed helping with tasks and cooking for people at the Elkins Manor where she was the longest resident, having lived there for thirty-one years. She loved to play bingo at the Junior Fire Department, enjoyed shopping, watching Jeopardy and was an avid baseball, football and NASCAR fan. She also loved spending time with her friend, “Buddy” the dog and was a former member of the Rebekah Lodge. Friends may call from 10:00 am until 11:00 am Friday, January 28, 2022 at the Tomblyn Funeral Home in Elkins. Mrs. Hendon will be moved to Mountain State Memorial Gardens where a graveside service will be held. Deacon Raymond Godwin will officiate and interment will follow. Masks and social distancing are recommended for anyone attending the service. Memorial contributions may be made to the Junior Volunteer Fire Department – Station 2, 112 Row Avenue, Junior, WV 26275 in memory of Betty. The Tomblyn Funeral Home of Elkins is in charge of the arrangements for Betty Jo Hendon. Condolences may be expressed to the family at www.tomblynfuneralhome.com.

Betty Jo Hendon, age 90 years, a resident of the Elkins Manor passed away Tuesday, January 25, 2022 in the Davis Medical Center. She was born January 27, 1931 in Atlanta, GA, a daughter of the late Claude and Margaret Courtney Bostwick. She... View Obituary & Service Information

The family of Betty Jo Hendon created this Life Tributes page to make it easy to share your memories.