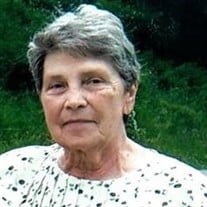 Betty Jo “Bet” Vance, age 90 years, a resident of Whitmer, gained her wings, and journeyed home on Monday, December 10, 2018 at 6:30 pm. Betty had been in declining health for the past seven years. She was born March 17, 1928 in Whitmer, a daughter of the late Joseph and Bertha Lamb Elza. On March 24, 1946 at Red House, Maryland, she married her Knight in Shining Armor, Guy Vance who preceded her in death February 12, 1992. They had celebrated forty six years of marriage. She was a loving, devoted wife and mother and a hard worker known as an impeccable housekeeper and cook. She loved children, and was a faithful friend to many, young and old. She was a former employee of the Whitmer Post Office, Davis Memorial Hospital and Mary’s Greenhouse. Betty worked for sixty two years as a poll worker for the Election Board, starting at the age of 18, in a one room school house and served many years as the secretary of the Laurel Hill Cemetery. She enjoyed making quilts for family and friends and doing puzzle books. She loved singing in the choir and was always there any time she was needed. Also preceding her in death besides her husband and parents was one grandchild; two brothers, Bob and Dale Elza; one brother-in-law, Emory; two nieces, Lisa and Donna and one nephew, Bobby Jo. Surviving are four children, Brenda Yokum of Bowden, Tommy and Thelma Vance of Elkins, Rex and Merry Lou Vance of Harman and J. Elaine and Gary Bradley of Elkins. Nine grandchildren, Rick (Phyllis), Jamey (Laura), Teresa (Donnie), Tommy (Tiffany), Tonya (Brian), Rex Jay (Megan), Jeremy, Merry Jo (Luke) and Aaron (Jenn). Fifteen great grandchildren, Ashley, Tessa, Emma, Adam, Tyler, Lucas, Trenton, Tanner, Taylen, Tinsley, Cody, Katelyn, Bronson Guy, Ronin and Isaac Guy. Four great great grandchildren, Harper, Hyson, Bricen and Kinley. Also surviving are three sisters, Wilma VanDevender, Linda (Jim) Dudley, Patricia (Ronnie) Armentrout; sister-in-law, Mary Ruth Elza and many nieces and nephews who she loved and adored. Friends may call from 6:00 pm until 8:00 pm Thursday, December 13, 2018 at the Tomblyn Funeral Home in Elkins. On Friday morning, Betty Jo will be moved to the Whitmer Church of God for visitation from 10:00 am until 12:00 noon the funeral hour. Rev. Steve Bailey will officiate and interment will follow in the Laurel Hill Cemetery at Whitmer. Memorial contributions may be made to the Whitmer Church of God. c/o Angie Roy, PO Box 93, Whitmer, WV 26296 in memory of Mrs.Vance. The Tomblyn Funeral Home of Elkins is in charge of the arrangements for Betty Jo “Bet” Vance. Condolences may be expressed to the family at www.tomblynfuneralhome.com.

The family of Betty Jo Vance created this Life Tributes page to make it easy to share your memories.