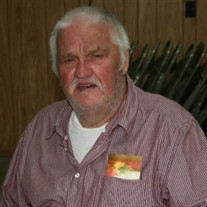 Billy Lee White, age 81 years, a resident of Belington, WV, passed away Thursday, August 6, 2020. He was born February 2, 1939 at Onego, WV, a son of the late Dawson and Gertrude White. After the death of his mother, Billy was raised by Rev. Hobart and Gladys Hedrick of Whitmer. He was married to Mary Ellen Helmick who preceded him in death August 9, 2003. He is survived by three sons, Billy Joe White and wife Deidre of Junior, Terry Lee White and wife Darla of Toledo, OH and Scott Allen White of Belington, one brother, Junior White of New York and two sisters, Pam Mullennex and husband Mike of Whitmer and Martha White of Morgantown, WV. Grandchildren, Kelley Scott, Nick White, Megan White, James White, Shawn White, Jennifer White, Brandon DeCair, Rachel Brittingham and Justin Shank and eighteen great grandchildren also survive. Also preceding him in death was one daughter, Michelle Lynn Brittingham, four brothers, Jerry, Chester, Edward and Richard White, daughter-in-law, Debra White and one sister, Ruby Kisamore. Billy was a mechanic with Roadway Transportation prior to his retirement and was a member of Teamsters Local 20. He was a devoted husband, father and always helped others and enjoyed riding his side by side and playing the lottery. Friends may call from 11:00 am until 1:00 pm Tuesday, August 11, 2020 at the Tomblyn Funeral Home in Elkins. A funeral service will be held at 1:00 pm Tuesday with Pastor Jeff Burnett officiating. Cremation will follow and interment of cremains will take place at Bailey Ridge Cemetery in Upshur County at a later date. As we continue to follow the mandate of Gov. Jim Justice and the guidelines established by the Center for Disease Control, masks and social distancing will be required for anyone attending the services for Mr. White. A memorial service will be held in Toledo, OH at 1:00 pm Saturday, September 12, 2020 at 1428 Gage Road, Toledo, OH 43612. In lieu of flowers, the family suggests that contributions be made to the Alzheimer’s Association, West Virginia Chapter, 1601 Second Avenue, Charleston, WV 25387 in memory of Billy. The Tomblyn Funeral Home of Elkins is in charge of the arrangements for Billy Lee White. Condolences may be expressed to the family at www.tomblynfuneralhome.com

Billy Lee White, age 81 years, a resident of Belington, WV, passed away Thursday, August 6, 2020. He was born February 2, 1939 at Onego, WV, a son of the late Dawson and Gertrude White. After the death of his mother, Billy was raised by Rev.... View Obituary & Service Information

The family of Billy Lee White created this Life Tributes page to make it easy to share your memories.