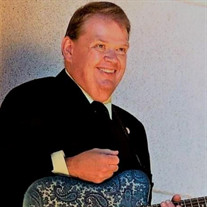 Bradley Allen “Brad” Gum, age 65 years, a resident of Elkins, departed this life Sunday, August 29, 2021 at Davis Medical Center after a brief illness. Brad, as he was known to friends, family, and music lovers all over, was born March 12, 1956 in Charleston, SC, the son of the late Carolyn Gibson and the late Leo Gum. In addition to his parents, he is also preceded in death by his uncle, Richard “Dick” Gibson, and his grandfather, Francis Gibson (known to him as “Pap”), whom he loved dearly. Brad spent most of his young life in the care of his “Pap”, growing up on South Henry Avenue in Elkins, and was often seen by his neighbors playing his guitar on the front porch from a young age. His neighborhood friends would often come over to play ball or ride bikes, but Brad was more interested in playing his guitar and it was always in arms reach. He attended the schools of Randolph County and was a member of the Shiloh Baptist Church and Truth Ministry Church. Brad’s love of music and the guitar just seemed to come naturally to him. Mostly self-taught, he quickly began to master the instrument from his early musical hero, Chet Atkins, and also, Roy Clark and Jerry Reed. Country music was always his first love, but Brad was a master player in many styles ranging from country to rock, blues, jazz, and more. Later in life, he would master the pedal steel guitar and could easily switch between the two instruments with the many bands and artists he performed with. Brad loved to share his passion for music with others and is personally responsible for teaching many budding guitarists over the years. Several went on to full-time careers in the music field while others have remained front porch pickers. But all share many fond memories of Brad and how he would encourage everyone in his own quiet, humble way. This was Brad’s way of “paying it forward” to new generations, just like several old-time players has taken him under their wings in his younger years. He never forgot where he came from and was always quick to give credit to those who had mentored and helped him in life. Brad’s love for music began at an early age, and by the time he was in his teens he was a staff musician for the world famous, Jamboree USA (Wheeling Jamboree). There he found his love for recording, and over the years he has played on many records and demos for national recording artists, jingles, and more as a studio musician. In later years, he went on to own his own studio. Locals will remember Brad from the many bands that he played in, which included Jim Hartman and the Country Heartbeats, Amorphous, the Davis & Elkins College “And All That Jazz” show choir, Mixed Company, Holly Garber, Lucky Enough, and many other groups, including the Heckels in the 70’s and 80’s. He later toured with the biggest names in country music, and cruised the ocean with his guitar. He worked in Nashville, Dollywood, Branson, Missouri, Eureka Springs, and Williamsburg, VA, to name a few. He also spent time with RCA recording artist, Johnny Russell, Lew Dewitt of the Statler Brothers, and even opened for the Judd’s. If a musician mentioned that they had played with Brad, it was like having a golden key and helped open doors for many musicians. Brad was a bit shy, except when playing his guitar. He was never flashy, nor wanted the spotlight, preferring to simply play his part to make the band or artist sound better. But boy could he play. This quiet man made a mighty sound! He finally came back to his hometown of Elkins, where he continued to operate and own his local music store “Music City”. Here he would often give private guitar lessons and helped supply musical instruments to many, for over 30 years. The Elkins music scene from the 1970s into the early 2000s would not have been the same without Music City and Brad Gum. Most recently, Brad played with the America Mountain Theater and the Franks Family Christmas Show in Elkins prior to his retirement. In later years, Brad also developed a love for archery and even competed at the state level in various tournaments. He was also a gun enthusiast and Ham Radio Operator. Maybe the only thing larger than Brad’s talents, which were far greater than his humble nature recognized, was the passion in Brad’s heart for his friends. Brad was a kind, loving, generous and gentle individual. He never forgot someone’s special day without a call, note or a gift. He was always there to offer words of encouragement and support to so many. If you were his friend then you knew just what a special person Brad really was. He has touched so many lives, he was an inspiration to many, his gift of music will continue in the lives he touched and his legacy will be carried on by those who he taught. Brad’s wish for cremation has been honored. In lieu of flowers, contributions may be made to the Randolph County Humane Society, P.O. Box 785, Elkins, WV 26241 in memory of Brad. The Tomblyn Funeral Home of Elkins is in charge of the arrangements for Bradley Allen “Brad” Gum. Condolences may be expressed at www.tomblynfuneralhome.com.

Bradley Allen &#8220;Brad&#8221; Gum, age 65 years, a resident of Elkins, departed this life Sunday, August 29, 2021 at Davis Medical Center after a brief illness. Brad, as he was known to friends, family, and music lovers all over, was born... View Obituary & Service Information

The family of Bradley Allen "Brad" Gum created this Life Tributes page to make it easy to share your memories.