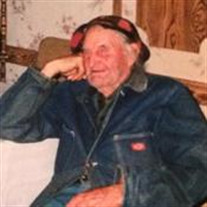 Bruce Robert “Pancake” Thompson, age 93 years, a resident of Sully, passed away at 4:05 am Wednesday, December 14, 2016 in the Davis Medical Center. He was born April 2, 1923 at Sully, a son of the late Dillon and Hettie Long Butcher Helmick Thompson. Mr. Thompson was raised in a large family with six step siblings from his father’s first marriage to Blanche Huffman, Leora, Aletha, Blake, Bland, Mabel and a deceased baby boy, Henry and six step siblings from his mother’s first marriage to Preston Helmick, Arthur, Dickson, Carrie, Texie, Charles and a deceased baby girl, Snowdie. On May 25, 1949 at Red House, MD, Bruce was united in marriage to Ocie Lillian VanDevender of Osceola, WV, the Sinks of Gandy. They had celebrated sixty seven years of marriage and had ten children, William “Bill” Thompson, Diana Crites, David Thompson, Kenneth Thompson and wife Virginia, Barbara Worden and husband Eddie, Donna Crickard and husband John, Stella Harvey and husband Kenneth, Jamie Kittle and husband Rick, Linda Thompson and Steven Thompson and wife Patricia. Four siblings, Frank Thompson, Ruby Thompson, Betty Thompson Woodford and Bessie Thompson Miers, eight grandchildren, Christopher Crites, Shawn and Laura Thompson, Jessica and Angelica Harvey, Micah, Karlie and Emma Thompson, one step grandchild, Heather Kittle also survive. A great grandchild is due to be born in July 2017. Also preceding him in death were one child, Carol Bruce Thompson, all twelve of his step siblings and five of his siblings, Lester, Seymour, and Hugh Thompson, Grace Thompson Kerns Lugo and Ruth Thompson Waybright. Bruce was a jack of all trades. He and his step-brother Dickson, lied about their ages after the great depression in order to obtain work to help their family. During this time, they worked for the Civilian Conservation Corps (CCC) and built many of the area roads from Sully to Jenningston and Thornwood to Greenbank. He then worked for the Forestry office and worked as fire watchman, stationed at the lookout tower on Bickel’s Knob. He also spent time working as a miner, logger and as always, a dedicated farmer. He was a very kind, generous, and well respected man by all that knew him. He and his wife always had a house full of kids and other guests, never turning anyone away without lodging and a good meal. He also was never one to turn a blind eye to his fellow farmers, whether it was hay needing made, calving trouble or just advice. He was a very active person well up into his 80’s, always traipsing the mountains he called home. He enjoyed ramping, ginsenging, turkey and grouse hunting, and just being outdoors. Often times, he would be gone all day from morning until dark, just walking the mountain sides. Bruce was quite a character; so full of life, love, and humor all the way until the end of his life. He loved his entire family very much and was very proud to share the family’s history and to pass on all of the wisdom and stories that he had collected throughout his 93 years. He will definitely be missed by every single person that he ever came in contact with him. Friends may call from 10:00 am until 12:00 pm Saturday, December 17, 2016 at the Tomblyn Funeral Home in Elkins. A funeral service will be held at 12:00 pm Saturday from the funeral home chapel with Rev. J.R. Mayle and Pastor Paul Stadelman officiating. Interment will follow in the Elkins Memorial Gardens on the Country Club Road, Elkins. The family request memorial contributions be made to the Randolph County Humane Society, P.O. Box 785, Elkins, WV 26241. The Tomblyn Funeral Home of Elkins is in charge of the arrangements for Bruce Robert “Pancake” Thompson. Condolences may be expressed to the family at www.tomblynfuneralhome.com.

The family of Bruce Robert Thompson created this Life Tributes page to make it easy to share your memories.