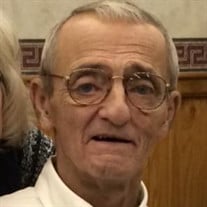 Bruce Dewain Woolwine age 70 years, a former resident of Beverly, passed from this life February 4, 2020 in the Elkins Rehabilitation & Care Center following an extended illness. He was born September 16, 1949 at Elkins, a son of the late Roy F. Woolwine, Sr. and Erma Goff Woolwine. In March of 2006 he was married to Ialanta “Jeanie” Woolwine, who preceded him in death February, 27, 2019. Left to cherish his memory is a step-daughter, Brenda K. Vanscoy and husband Teddy of Montrose; two sisters, Doris J. Boggs of the Teter Creek Lake Community and Tama C. Dickinson and husband Bob of Ansted, WV and one brother, Roy F. Woolwine, Jr. and wife Vicki of the Fairview Community, Elkins. Two step grandchildren, Heath and Lauren Vanscoy, several special nieces and nephews and great nieces and nephews also survive. Also preceding him in death was one brother, Kent Thomas Woolwine and his grandparents, Guy and Icie Woolwine and Henry B. and Mildred (Hedrick) Goff. Bruce was a member of both the Elkins Junior High School and Elkins High School Marching Bands. After graduation from Elkins High School, he served his country proudly by joining the United States Navy serving in Vietnam. Bruce was employed by the West Virginia Department of Highways as a Bridge Inspector until his retirement. He was a member of HW Daniels Post 29 American Legion and Tygart Valley Post 3647 Veterans of Foreign Wars. At the request of the deceased, he will be cremated. The family will receive friends from 10:00 am until 11:00 am Saturday, February 15, 2020 at the Tomblyn Funeral Home in Elkins. A memorial service will be held at 11:00 am Saturday, February 15th from the funeral home with Pastor Ann Fretwell officiating. Interment will follow in the American Legion’s Little Arlington Cemetery near Cravensdale. Full Military Honors will be accorded at the graveside by the United States Navy, H.W. Daniels Post 29 American Legion and Post 3647 Veterans of Foreign Wars. The family requests in lieu of flowers, contributions be made to Mountain Hospice, 1600 Crim Ave., Belington, WV 26250 in memory of Bruce. The Tomblyn Funeral Home of Elkins is in charge of the arrangements for Bruce Dewain Woolwine. Condolences may be expressed to the family at www.tomblynfuneralhome.com.

Bruce Dewain Woolwine age 70 years, a former resident of Beverly, passed from this life February 4, 2020 in the Elkins Rehabilitation & Care Center following an extended illness. He was born September 16, 1949 at Elkins, a son of the late Roy... View Obituary & Service Information

The family of Bruce D. Woolwine created this Life Tributes page to make it easy to share your memories.