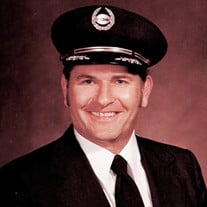 Captain Perry E. Dillon, age 84 years, a resident of Beverly, passed away Wednesday, June 16, 2021 at his home under the care of Mountain Hospice. He was born March 29, 1937 at Barton, WV a son of the late William V. Dillon and the late Anna Lucille Farley Dillon Moses. On July 20, 1957 at Mill Creek, he was married to Reta Jane Defibaugh who survives at Beverly. Also surviving are two sons, Nick Dillon and wife Missy of New Bern, NC and Rick Dillon and wife Libby of Elkins; three daughters, Betsy Webb and husband David of Beverly, Deb Dillon of Elkins and Donna Elza of Beverly. Three sisters, Ann Austin of Staunton, VA, Patty Pritt and husband Ed of Elkins and Vicky Harrison of Staunton, VA and six grandchildren, Brian Webb, Jeremy Webb, Courtney Stalnaker, Adam Elza, Madison Dillon and Nicholas Dillon also survive. Also preceding him in death in addition to his parents, were his step-father, Bill Moses, one brother, Joe Moses and one grandson, Justin Elza. Perry was a graduate of Tygart Valley High School with the Class of 1955 and was a Commercial Airlines Pilot prior to his retirement. His career as a pilot began with his first flight January 7, 1956 spanning thirty-eight years, flying his final flight January 21, 1994. On March 31, 1964 he was First Officer at Lake Central Airlines, then Allegheny Airlines and later US Air. He commercially flew DC-3, Nord 262, Convair 580, DC-9, 737, 757, 767 airplanes and numerous general aviation aircrafts. He was a founding member of the Elkins Pilots Club and the club’s first instructor. He was a member of Randolph Lodge No. 55 AF & AM of Beverly and was an avid supporter of local sports and loved attending sporting events. Friends may call from 5:00 pm until 8:00 pm Friday, June 18, 2021 at the Tomblyn Funeral Home in Elkins. A funeral service will be held at 11:00 am Saturday, June 19th from the funeral home chapel. Bishop Larry McArthur and Keith Hamrick will officiate. Interment will follow at the Mountain State Memorial Gardens near Gilman where Beverly Lodge No. 55 AF & AM will conduct masonic graveside rites. Dedication of the grave will be performed by Bishop Larry McArthur. Masks and social distancing is recommended for those attending the services. The Tomblyn Funeral Home of Elkins is in charge of the arrangements for Captain Perry E. Dillon. Condolences may be expressed to the family at www.tomblynfuneralhome.com.

Captain Perry E. Dillon, age 84 years, a resident of Beverly, passed away Wednesday, June 16, 2021 at his home under the care of Mountain Hospice. He was born March 29, 1937 at Barton, WV a son of the late William V. Dillon and the late Anna... View Obituary & Service Information

The family of Captain Perry E. Dillon created this Life Tributes page to make it easy to share your memories.