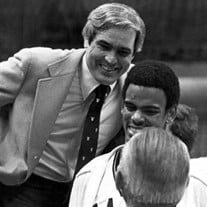 Mr. Carl Richard Tacy, 87, a resident of Winston-Salem, died April 2, 2020 at Mountain Valley Hospice & Palliative Care in Yadkinville, North Carolina. Mr. Tacy was born June 18, 1932, in Huttonsville, West Virginia, a son to the late Gilbert Lee and Alva Lona Archer Tacy. In 1955 he married the former Donnie Marston, also of Huttonsville. Carl graduated from Davis & Elkins College in 1956 with a Bachelors of Science in Physical Education and went on to coach basketball for 10 years on the high school level. Upon completing a Master’s degree at Radford College University he served as men’s basketball coach for three years at Ferrum (Va.) Junior College. Tacy served one season as an assistant coach, at Marshall University, before assuming the title of head coach there, guiding the Thundering Herd to an NCAA appearance in 1972. Later in 1972, Tacy became head men’s basketball coach at Wake Forest University, a title he a held for 13 seasons. Under his leadership, the Demon Deacons won 222 games, had five 20-win seasons, and twice reached the Regional Finals (Elite Eight) of the NCAA tournament; first in 1977 and again in 1984. Carl was twice voted a finalists for the NCAA Division I National Coach of the Year Award. He is a member of the Wake Forest University, Ferrum College, and Davis & Elkins College, Sports Halls of Fame, and was a recipient of the Radford University Outstanding Alumnus Award. Carl Served as Deacon at First Baptist Churches in Winston-Salem and Waynesboro (VA), was a member of the Lion’s and Civitan Clubs in Winston-Salem, as well as Gideon’s International. Carl truly loved his teams and was proud to see so many student athletes he helped coach go on to have successful careers whether playing professional basketball, or otherwise. Carl would want to be remembered as a teacher and mentor, an avid outdoorsman and devout Christian, but and most of all, as a loving father, grandfather and loyal husband. Carl is survived by his wife Donnie, son Carl Tacy, Jr., daughters Carla Tacy and Andrea Kelly Tacy, as well as grandsons Peer, Nathan, Eli, Aiden, and Liam, and one great-grandson, Zachary. Due to current circumstances, the family is interring Carl at a private graveside service in West Virginia. A memorial service will be held at a later date; details pending. In lieu of flowers, contributions to the First Baptist Church on Fifth, Church Renovation Fund, would be greatly appreciated. Please visit www.firstonfifth.org. Tomblyn Funeral Home, 45 Randolph Ave., Elkins, WV 26241 is assisting the family. On-line condolences may be made through www.tomblynfuneralhome.com

The family of Carl Richard Tacy created this Life Tributes page to make it easy to share your memories.