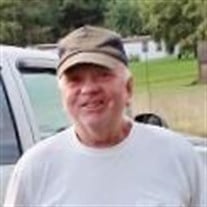 Carl E. Vandevender, age 74 years, a resident of Leading Creek Road, Montrose, passed away unexpectedly Tuesday, February 27, 2018. He was born December 19, 1943 at Montrose, a son of the late French O. and Vallie J. Arbough Vandevender. On December 12, 2012 at Oakland, MD, he was married to Emma R. Lambert who survives. Also surviving is one son, Carl L. Vandevender of Montrose, one step-son, Odbert Allen Triplett of Littlerock, AR and one step-daughter, Sherry Armstrong of Elkins. One brother, Herman R. Vandevender of Virginia Beach, VA; two sisters, Bertie Adkins-Laderer of Barberton, OH and Carol M. Hudnall of Elkins and ten grandchildren also survive. Also preceding him in death was one sister, Kittie J. Shaffer. Carl was a Veteran of the United States Army and was a self-employed heavy equipment operator. He attended the Shiloh Baptist Church of Elkins. Friends may call from 5:00 pm until 7:30 pm, Friday March 2, 2018 at the Tomblyn Funeral Home in Elkins. A funeral service will be held at 7:30 pm Friday from the funeral home chapel with Pastor Terry Cannon officiating. Presentation of the American Flag will be made by members of the WV National Guard Honor Guard Program. At Carl’s request, cremation will follow. The family suggests that memorial contributions be made to the Leading Creek Volunteer Fire Department, P. O. Box 158, Kerens, WV 26276 in memory of Carl. The Tomblyn Funeral Home of Elkins is in charge of the arrangements for Carl E. Vandevender. Condolences may be expressed to the family at www.tomblynfuneralhome.com.

The family of Carl E. Vandevender created this Life Tributes page to make it easy to share your memories.