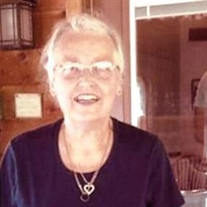 Carol Lee Mallow, age 64 years, a resident of Elkins, passed away Monday, April 1, 2019 in the Ruby Memorial Hospital in Morgantown. She was born July 13, 1954 in Elkins a daughter of the late Samuel Evans Miller and Maureen Harris Miller who survives in Elkins. In July of 1983, she married Jackie Eugene “Jack” Mallow who survives in Elkins. Also surviving are two sons, Patrick Mallow and wife Chrissy of Elkins and Phil Dayton Butcher and wife Amy of Beverly. Four brothers, Kevin Miller and wife Dianna of Myrtle Beach, SC, John Miller and wife Pam, James Michael Miller and wife Patty and Samuel “Sammy” Evans Miller all of Elkins; two sisters, Kim Dick and husband Dave of Elkins and Patricia Bennett and husband Jeff of East Dailey; one grandchild, Morgan Butcher, one aunt, Violet Davis of England, her Yorkie dog named Cooper whom she loved spending time with also survive along with several nieces, nephews, special friends, Bob and Charlene Baisi and friends from the EHS Class of 1973. Also preceding her in death was one sister-in-law, Frances Miller. Carol attended the schools of Randolph County and was a 1973 graduate of Elkins High School. She was employed at the Tastee Freeze for twenty five years, Colonial Mill Works for twelve years and for the past five years was employed by In Home Select Service. Carol was a member of the Crystal Springs Community Church and enjoyed bowling in her younger years. Friends may call from 6:00 pm until 8:00 pm Thursday, April 4, 2019 at the Tomblyn Funeral Home in Elkins. A funeral service will be held at 11:00 am Friday, April 5th from the funeral home chapel with Pastor Dave Collins officiating. Interment will follow in the Mountain State Memorial Gardens near Gilman. Memorial contributions may be made to the Crystal Springs Community Church Crisis Fund, c/o Nancy Bolyard, 138 Tanglewood Drive, Elkins, WV 26241 in memory of Carol. The Tomblyn Funeral Home of Elkins is in charge of the arrangements for Carol Lee Mallow. Condolences may be expressed to the family at www.tomblynfuneralhome.com.

Carol Lee Mallow, age 64 years, a resident of Elkins, passed away Monday, April 1, 2019 in the Ruby Memorial Hospital in Morgantown. She was born July 13, 1954 in Elkins a daughter of the late Samuel Evans Miller and Maureen Harris Miller who... View Obituary & Service Information

The family of Carol Lee Mallow created this Life Tributes page to make it easy to share your memories.