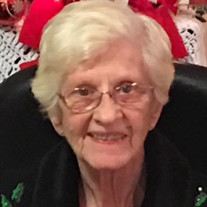 Carol Yvonne Sines, age 75 years, a former resident of Elkins and more recently a resident of Bridgeport, WV, passed away Sunday afternoon, October 8, 2017 in Bridgeport. She was born June 6, 1942 at Beverly, a daughter of the late Thurman Cleveland Daniels and the late Violet Kisner Daniels. On June 21, 1971, she was married to Elmo Darrell Sines who preceded her in death on January 28, 1998. Surviving are three daughters, Debra Denise Shue Kerr of Bridgeport, Delinda Dawn Shue Cooper of Elkins and Tiffanie Lynn Sines Tate. Four grandchildren, Jacob and Sarah Cooper, Noah Gibson, Sydnie and Sierra Tate, three great grandchildren, Ayla, Isayah and Mia Gibson, one brother, Charles Daniels and one sister, Betty Merritt also survive. Also preceding her in death were one grandson, Aaron Gibson and eleven brothers and sisters. Carol attended the schools of Randolph County, was a devoted wife and mother, homemaker and caregiver to her husband and youngest daughter. She loved gardening, ceramics and was a team member on bowling leagues for many years. She was a member of the Church of the Brethren. Friends may call from 6:00 pm until 8:00 pm Wednesday, October 11, 2017 at the Tomblyn Funeral Home in Elkins. A funeral service will be held at 11:00 am Thursday, October 12th from the funeral home chapel with LaDeanna Teets officiating. Interment will follow in Mount Vernon Cemetery near Beverly. Memorial contributions may be made to the Alzheimers Association of West Virginia, Northern Regional Office, 1299 Pineview Drive Suite # 3, Morgantown, WV 26505 in memory of Mrs. Sines. The Tomblyn Funeral Home of Elkins is in charge of the arrangements for Carol Yvonne Sines. Condolences may be expressed to the family at www.tomblynfuneralhome.com.

Carol Yvonne Sines, age 75 years, a former resident of Elkins and more recently a resident of Bridgeport, WV, passed away Sunday afternoon, October 8, 2017 in Bridgeport. She was born June 6, 1942 at Beverly, a daughter of the late Thurman... View Obituary & Service Information

The family of Carol Yvonne Sines created this Life Tributes page to make it easy to share your memories.