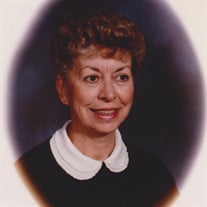 Carol Yvonne “Bonnie” Moore Gainer, age 81 years, a resident of Parsons, passed away at 12:50 A.M. Monday, May 16, 2016 at her residence. She was born March 12, 1936 at Hambleton, Tucker County, a daughter of the late Arthur W. Moore and Bricy Sponaugle Moore. On August 30, 1953, at Elkins, she was married to Joseph B. Gainer who survives in Parsons. Also surviving is one son, Michael Gainer of Sunset Beach, NC and one daughter, Tammy Jo Lothes of Elkins. Two brothers; Dale Moore of Altoona, FL, Bill Moore of Lakeland, FL; four sisters, Jean Taylor, Barberton, OH, Kathleen Wilson, Daytona, FL, Arjetta Pigott, Parsons and Judy Sparkman of Altoona, FL; two grandchildren and four great grandchildren also survive. Also preceding her in death were two brothers, Roscoe L. “Coke” Moore and Franklin H. Moore and one sister Dorothy Shaw. Bonnie was a Title Clerk for car retailers for many years before retiring from Mountaineer Motors of Elkins. She was a member of Parsons Chapter No. 91 Order of the Eastern Star and a Methodist by faith. Friends may call from 6:00 P.M. until 8:00 P.M. Thursday, May 19, 2016 at the Tomblyn Funeral Home in Elkins. Parsons Chapter No. 91 Order of the Eastern Star will conduct a memorial service at 7:00 pm Thursday from the funeral home chapel. On Friday, May 20th, Mrs. Gainer will be moved to the Parsons City Cemetery where a graveside service will be held at 2:00 P.M. Pastor Ann Fretwell will officiate and interment will follow. Contributions may be made to Mountain Hospice, 1600 Crim Ave., Belington, WV 26250 in memory of Mrs. Gainer. The Tomblyn Funeral Home of Elkins is in charge of the arrangements for Carol Yvonne “Bonnie” Moore Gainer. Condolences may be expressed to the family at www.tomblynfuneralhome.com.

The family of Carol Y. "Bonnie" Gainer created this Life Tributes page to make it easy to share your memories.