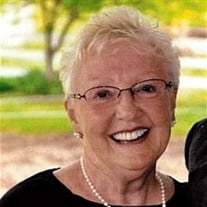 Carolyn June Snyder Dolly, age 74 years a resident of Rich Mountain, passed away Monday, July 8, 2019 at her home following an extended illness. She was the daughter of the late Hilda Elizabeth Snyder and the granddaughter of the late James Blaine “JB” Snyder and the late Cora Cooper Snyder all of whom resided on Rich Mountain. On June 29, 1962, Carolyn was married to her high school sweetheart, Jessie Dolly who survives at their home. Carolyn was a Harman High School cheerleader and Jessie was a Harman High School basketball player. They remained sweethearts while they cared for one another and their family. Jessie and Carolyn were married on her grandparent’s 57th wedding anniversary, June 29, 1905. They celebrated their 57th anniversary this past June. Also surviving are two daughters, Dedriah Dawn Dolly Irons and husband Tim of Elkins and Pittsburgh, PA and Sabrina Deanna Dolly Shiflett and husband Tim of Bridgewater, VA; three grandsons, Lucas “Luke” Timothy Shiflett and Reed Johnathan Shiflett both of Bridgewater, VA and Cooper Allen Irons of New York, NY; one sister, Rhoda Jane “Johnny” Eagle Mullenax and husband Roger, Elkins, many cousins including a very special first cousin, Mary Ruth Snyder Elza who was like a sister to Carolyn, of Whitmer. Mary was married to the late Dale Elza of Whitmer. Also preceding her in death was an aunt, Pearl Watson and five uncles, Roy. Curtis, Ward, John and Junior “JB” Snyder. Friends may call from 5:30 pm until 7:30 pm Friday, July 12, 2019 at the Tomblyn Funeral Home in Elkins. On Saturday, July 13th she will be moved to the Harman Church of the Brethren where a funeral service will be held at 11:00 am. Pastor John Moyer will officiate and interment will follow in the Snyder Cemetery at Harman. The family of Carolyn wishes to thank everyone who has thoughtfully responded to their needs. Your caring and sharing are deeply appreciated. Thank you to all the wonderful staff at Mountain Hospice for the professional and compassionate care they provided to our family. The Tomblyn Funeral Home of Elkins is in charge of the arrangements for Carolyn June Snyder Dolly. Condolences may be expressed to the family at www.tomblynfuneralhome.com.

Carolyn June Snyder Dolly, age 74 years a resident of Rich Mountain, passed away Monday, July 8, 2019 at her home following an extended illness. She was the daughter of the late Hilda Elizabeth Snyder and the granddaughter of the late James... View Obituary & Service Information

The family of Carolyn June Snyder Dolly created this Life Tributes page to make it easy to share your memories.