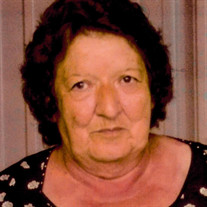 Carolyn Louise Turner, age 68 years, a resident of Whitmer, passed away Saturday, December 22, 2018 at her home. She was born, April 29, 1950 at Whitmer, a daughter of the late David and Edna McDaniels Mullenax. She was married to Clarence Turner for fifty two years who survives at Whitmer. Also surviving are two sons, William G. Turner and companion Amanda K. Adamson of Whitmer and Timothy W. Turner and wife Melissa of Bowden, WV. Four grandchildren, Johnathan Turner and wife Emily, Timothy “Shayne” Turner and Summer Turner all of Bowden and Heidie Shiflett of Whitmer; one great grandchild, Ella Shiflett of Whitmer; four brothers, Donald Mullenax and wife Patricia, Whitmer, William “Sam” Mullenax, Whitmer, Michael Mullenax and wife Lora Mae of Job, WV, Paul Mullenax and companion Jessica Workman of Montrose; one sister, Gail “Susie” Reed and husband Roger of Beverly and a sister-in-law, Margaret Mullenax of Charles Town, WV also survive. Also preceding her in death were two brothers, James and Floyd Mullenax, two sisters, Rosalee Kepner and Betty Collins and a sister-in-law, Patricia “Patty” Mullenax. Carolyn attended the schools of Randolph County. She was a Homemaker, a member of the Ladies Auxiliary of the Whitmer Volunteer Fire Department for many years and a member of the Whitmer Church of God. Friends may call from 12:00 pm until 2:00 pm Thursday, December 27, 2018 at the Whitmer Church of God. A funeral service will be held at 2:00 pm Thursday from the church with Pastor Jim Purnell and Bishop Jamie Estep officiating. Interment will follow in the Mullenax Cemetery near Whitmer. Contributions may be made to the Rosenbaum Family House, PO Box 8228, Morgantown, WV 26505-8228 in memory of Carolyn. The Tomblyn Funeral Home of Elkins is in charge of the arrangements for Carolyn Louise Turner. Condolences may be expressed to the family at www.tomblynfuneralhome.com.

Carolyn Louise Turner, age 68 years, a resident of Whitmer, passed away Saturday, December 22, 2018 at her home. She was born, April 29, 1950 at Whitmer, a daughter of the late David and Edna McDaniels Mullenax. She was married to Clarence... View Obituary & Service Information

The family of Carolyn Louise Turner created this Life Tributes page to make it easy to share your memories.