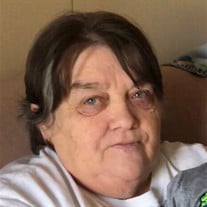 Carolyn S. Zirkle, age 67 years, a resident of Mabie, passed away Thursday, August 2, 2018 in the Davis Medical Center. She was born November 11, 1950 at Elkins, a daughter of the late Arthur and Gatha Hedrick. She was twice married, first to Austin LeRoy Leary who preceded her in death February 24, 2007 and then on August 28, 2010 at Mill Creek, she was married to James L. Zirkle who survives. Also surviving are three sons, David Leary of Beverly, Bobby Leary and wife Dawn and Buddy Leary and wife Ashley of Elkins and one daughter, April Hannah and husband Vencil of Mill Creek. Three step sons, Andrew, Jeffery and Jamie Zirkle, and two step daughters Shawna Roy and Emily Cooper. Three brothers, Larry Hedrick of Elkins, Garry Hedrick and wife Annie and Eric Hedrick of Elkins. Seven sisters, Sandra Campbell of Craigsville, VA, Sharron Elza and husband Roger and Shelva Poe of Elkins, Julie Waybright and husband Greg, and Barbara Hedrick of Whitmer, Kathy Gonzales of Keyser, WV and Fay Rhodes and husband Don of Junior. Grandchildren, Joey, Lucas, Austin, Lilly, Aliviyah, Amanda, Jennifer, Melissa, Brooke, Shelby and Levi and several great grandchildren also survive. Also preceding her in death were one brother, Ronnie Hedrick and one great grandson, Gavin Herron. Carolyn was retired from the Randolph County Senior Center where she had worked as an in home care giver and was a member of the Church of God. Friends will be received from 5:00 pm until 7:00 pm Monday, August 6, 2018 at the Tomblyn Funeral Home in Elkins. A funeral service will be held at 11:00 am Tuesday, August 7th, from the funeral home chapel with Rev. Earl Bible officiating. Interment will follow in the Rowan Memorial Cemetery at Mabie. The Tomblyn Funeral Home of Elkins is in the charge of the arrangements for Carolyn S. Zirkle. Condolences may be expressed to the family at www.tomblynfuneralhome.com.

Carolyn S. Zirkle, age 67 years, a resident of Mabie, passed away Thursday, August 2, 2018 in the Davis Medical Center. She was born November 11, 1950 at Elkins, a daughter of the late Arthur and Gatha Hedrick. She was twice married, first... View Obituary & Service Information

The family of Carolyn S. Zirkle created this Life Tributes page to make it easy to share your memories.