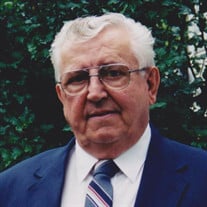 Mr. Charles Otto Dulaney, age 89 years, a resident of Pickens, passed away Wednesday, November 2, 2016 at his home. He was born July 10, 1927 at Pickens, a son of the late Cecil and Elsie Betler Dulaney. On July 5, 1951 in Elkins, he married Rosa Lea Sutton Dulaney who survives at Pickens. Also surviving are three sons, Charles Dulaney and wife Diane, Czar, WV, Mark Dulaney and wife Pam, Concord, NC and Henry Dulaney of Pickens. Three daughters, Ida Cecchini and husband Les of Burgettstown, PA, Phyllis Griffith and husband Leonard of Valley Bend and Sue Waugh and husband Brian of Dailey. One brother, Ed Dulaney and Sue, Florida; two sisters, Ruth May Shears, Fairmont, WV and Frieda Marie Drummond of Oakland, MD; a sister-in-law, Mrs. William (Sandy) Dulaney of Ohio; ten grandchildren and six great grandchildren also survive. Also preceding him in death were two brothers, Cecil Claude Dulaney and William Dulaney and one sister, Margaret Ann Haught. Mr. Dulaney attended the schools of Randolph County and was a Veteran of the United States Army serving in the 1538th Engineers in Austria. He was awarded the World War II Victory Medal and the Army of Occupation Medal. He was employed by J. M. Huber Corporation having retired as Superintendent of the Beech Mountain Railroad. He attended the Pickens Presbyterian Church; was a member of American Legion Post 200 and was a Roberts-Cunningham Museum Volunteer. Friends may call from 6:00 pm until 8:00 pm Friday, November 4, 2016 at the Tomblyn Funeral Home in Elkins. A funeral service will be held at 11:00 am Saturday from the funeral home with Rev. James Morley officiating. Interment will follow in the Pickens Cemetery where Military Honors will be accorded at the gravesite. Memorial contributions may be made to West Virginia Caring, PO Box 760, Arthurdale, WV 26520 in memory of Mr. Dulaney. The Tomblyn Funeral Home of Elkins is in charge of the arrangements for Mr. Charles Otto Dulaney. Condolences may be expressed to the family at www.tomblynfuneralhome.com.

Mr. Charles Otto Dulaney, age 89 years, a resident of Pickens, passed away Wednesday, November 2, 2016 at his home. He was born July 10, 1927 at Pickens, a son of the late Cecil and Elsie Betler Dulaney. On July 5, 1951 in Elkins, he married... View Obituary & Service Information

The family of Charles Otto Dulaney created this Life Tributes page to make it easy to share your memories.