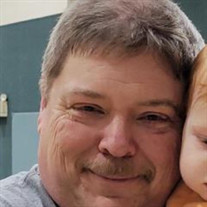 Charles Mark “Chuck” Keller, age 60 years, a resident of Elkins, passed away Sunday, May 1, 2022 in the Davis Medical Center. He had been in his usual health and death was unexpected. He was born October 13, 1961 in Elkins, a son of the late Charles V. Keller and the late Nancy Day Keller. On April 4, 1987 in Elkins, he was married to Pamela “Pam” Satterfield who survives. Also surviving is one daughter, Erin Nicole Greenleaf and husband Kyle Lawrence of Tannersville, PA and one son, Matthew Charles Keller of Bridgeport, WV. One sister, Kris Nelson and husband Davey of Elkins and two grandchildren, Rowan Charles Greenleaf and Declan Mitchell Greenleaf. Also surviving is one cousin, Eloise Keller; three aunts, Louise Hart, Anita Currence and Marie Kennedy and one uncle, Woodrow Simmons. In addition to his parents, he was preceded in death by his mother-in-law, Virgie Satterfield, August 2, 2014; grandparents, Jacob and Silvia Keller and Woodrow and Eva Simmons; and his cousin, Johnny Keller in January 2013. Chuck was a graduate of Elkins High School with the Class of 1979 and a graduate of Davis & Elkins College with a Degree in Business in 1982. He had been employed at Western Steer during high school and college. On February 14, 1989 he began working as a tax appraiser for the Randolph County Commission where he was employed at the time of his death. Friends may call from 6:00 pm until 8:00 pm Thursday, May 5, 2022 at the Tomblyn Funeral Home in Elkins. Chuck’s request for cremation will then be honored. Memorial contributions may be made to the Elkins Area Bands Auxiliary, C/O Linda Haddix, CPA, 512 South Randolph Avenue, Elkins, WV 26241 or FUMC Troop 88, 315 Kerens Avenue, Elkins, WV 26241 in memory of Chuck. The Tomblyn Funeral Home of Elkins is in charge of the arrangements for Charles Mark “Chuck” Keller. Condolences may be expressed at the family at www.tomblynfuneralhome.com.

The family of Charles M. "Chuck" Keller created this Life Tributes page to make it easy to share your memories.