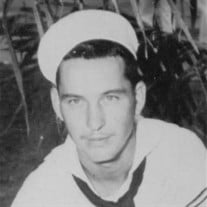 Charles F. “Charlie” Welch, Sr., age 88 years, went home to be with the Lord on Saturday, October 12, 2019. Charlie as he was called was born September 6, 1931 at Coalton, one of twelve children born to the late Wirt and Mabel Arbogast Welch. In 1954, Charlie married his childhood sweetheart, Mary Shannon who preceded him in death October 31, 2017. They were married for sixty three years. Surviving are four children, Teri (Welch) Petry and husband Terry of Madison, OH, Vickie (Welch) Patrick and late husband Jim, along with Vickie's partner David Hyatt of Ellerslie, GA, Charles Welch, Jr and wife Valerie of Tacy, WV and Tina (Welch) Corcoran and husband Matt of Elkins. Charlie was blessed with 15 grandchildren and 12 great-grandchildren. Two brothers and three sisters also survive. Also preceding him in death were three brothers and three sisters. He was a Torpedo-man in the US Navy serving during the Korean War aboard the USS Cone. After leaving the Navy, Charlie worked for General Electric Company prior to his retirement. He loved the outdoors, hunting, fishing, growing a large garden, wood working and carving. Charlie and Mary are reunited once again, strolling the streets of Heaven, hand in hand. Friends may call from 6:00 pm until 8:00 pm Tuesday, October 15, 2019 at the Tomblyn Funeral Home in Elkins. A funeral service will be held at 11:00 am Wednesday, October 16th from the funeral home chapel with Pastor Mike House officiating. Interment will follow in St. Vincent Cemetery, Kingsville Road, Coalton, WV where full military rites will be accorded by members of the Navy Honor Guard, HW Daniels Post 29 American Legion and Tygart Valley Post 3647 Veterans of Foreign Wars. The Tomblyn Funeral Home of Elkins is in charge of the arrangements for Charles F. “Charlie” Welch, Sr. Condolences may be expressed to the family at www.tomblynfuneralhome.com

The family of Charles F. "Charlie" Welch, Sr. created this Life Tributes page to make it easy to share your memories.