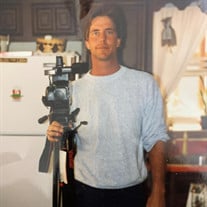 Christopher Donald (Chris) Hansen of Johnson City, TN, formerly of Elkins WV and Kingsport, TN, passed away on March 1, 2021.in the Johnson City Medical Center, Johnson City, Tennessee. He was born December 20, 1957, in Painesville, Ohio, the son of Donald (deceased) and Joyce (Welch) Hansen. He had been in failing health for several years. He is survived by three sons, Eric Hansen, Jayce Best and Matthew Hansen; his mother Joyce, of Elkins; one brother David Hansen and wife Janet of Topsail Beach, N.C.; two sisters, Andrea Hansen-Ford and husband Edward of Beverly; Linda Hansen of Elkins; a former longtime companion and special friend, Mary Lou Fajman; one grandson, Liam Hansen; one granddaughter, Caysen Hansen; two nephews, Brian Sipe; Elliott Sipe and wife Bridgett; one niece, Rebekah Ford, Guernsey, England; cousins, Nina Hansen; Robert Mc Cann and wife Karen; James Trunk and wife Catalina; several family members and friends. In addition to his father, he was predeceased by one son, Patrick Hansen; cousins, Kitty Jean Hansen; David Allen Hansen and other family members. Chris graduated from Elkins High School in 1976. He enlisted in the U.S. Army and served in the United States and abroad. After discharge from the service he secured employment in Texas, Tennessee and Florida. He was an expert paver and assisted in building highways for 22 years in Florida. He had earned his CDL license and operated a variety of machines and equipment. Chris loved his family and enjoyed being with and talking about his friends. He was very proud of his sons who were awarded college scholarships; Matthew for baseball and Patrick for football. He had an entertaining sense of humor and loved making people laugh. He valued all nature, animals and especially his pets. He was a creative writer and published poet. Chris was an avid WVU fan throughout his life. He also enjoyed studying the weather and universe. Favorite pastimes in his declining years were watching sporting events and various programs on the television as well as listening to music. He was a member of St. Brendan Church prior to leaving Elkins. A memorial will be held at a later date. Many people supported and aided Chris as he struggled with several health issues. Special thanks are extended to VA Medical Center, Johnson City Medical Center, Life Care, Providence Companion Care and several other organizations all in Tennessee. Memorial contributions may be given to: Elkins Little League, P.O, Box 1724, Elkins WV, 26241; Elkins Youth Football & Cheer, 587 Sugar Run Rd., Montrose, WV 26283; Randolph County Humane Society, 195 Weese St., Elkins, WV 26241. This announcement is a courtesy of the Tomblyn Funeral Home of Elkins for Christopher Donald (Chris) Hansen. Condolences may be expressed to the family at www.tomblynfuneralhome.com.

The family of Christopher Donald Hansen created this Life Tributes page to make it easy to share your memories.