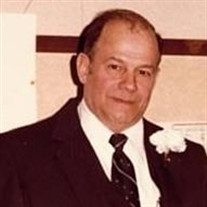 Custer Stratton “Strat” Ogden, Jr., age 93 years old went home to be with the Lord on Wednesday, September 19, 2018. He was born in Fairmont, WV, on August 1, 1925 a son of the late Custer Stratton Ogden, Sr. and the late Hallie Knutti Ogden. He was married to Halene Sponaugle Ogden who survives at their home in Alpena, WV. To this union was five sons, Conley Ogden and wife Diana of Elkins, Eddie Ogden and wife Brenda of Buckhannon, WV, Terry Ogden and wife Debbie of Alpena, WV, Stephen Ogden and Carol Hartley of Montrose, WV and Theodore B. Ogden and wife Nettie of Alpena, WV. He has two daughters by a former marriage, Sue Ogden Bigley of Seville, OH and the late Helen Ogden Soval. He also has a son, David Bennett of Chillicothe, OH and one half-brother, Jack Ogden and wife Ellen of Rivesville, WV. He was the proud grandfather of Luke Ogden and wife Jennifer of Lillington, NC, Adam Ogden and wife Leslie of Belington, WV, Jesse Ogden of Ashland, KY, Beechard Howell and wife Jodi of Elkins, Stacy Ogden Hansen and husband Brian of Aubrey, TX, Destiny and Dakota Ogden of Buckhannon, WV, Carrie Ogden Bonner and husband Matthew of Alpena, WV, Beverly Ogden Orange and husband Eric of Roanoke, VA, Amanda Ogden Hinchman and husband Eddie of Montrose, WV, Danielle and Tasha Hartley of Montrose, WV, Johnny Ogden and wife Amanda of Alpena, WV, Stefanie Ogden Geesey and husband Jeremy of Alpena, WV, Annette Glover and husband Jeffery, Susan Carpenter, Shelley Sweitzer and Tanya Bennett and eighteen great grandchildren. While living, Mr. Ogden was a member of five living generations of the Ogden family. He was preceded in death by his father, mother, infant daughter, Sherry Lynn Ogden and two brothers, Howard K. Ogden and Theodore Emil Ogden. He attended school at Alpena, Fairmont, WV and the Elkins High School. He was in the CC Camp in Wyoming. He served his country in World War II in the South Pacific as a Veteran of the United States Navy. He worked for the Western Maryland/CSX Railroad for thirty eight years and retired as an engineer on September 13, 1985. He was a member of the Gospel Light Tabernacle. He loved to raise a garden and farm. Friends may call from 6:00 pm until 8:00 pm Friday, September 21, 2018 at the Tomblyn Funeral Home in Elkins. A funeral service will be held at 11:00 am Saturday from the funeral home chapel with Rev. A. H Belt and Rev. Conley Ogden officiating. Interment will follow in the Alpena Cemetery. At the request of the deceased, flowers are to be omitted and memorial contributions may be made to the Alpena Cemetery Fund, 3568 Sully Road, Bowden, WV 26254 in memory of Strat. The family would like to extend a special thank you to all the nurses and staff who helped assist in the care of Custer Stratton Ogden, Jr; Davis Medical Center, Valentine Personal Care Home and West Virginia Caring. The Tomblyn Funeral Home of Elkins is in charge of the arrangements for Custer Stratton “Strat” Ogden, Jr. Condolences may be expressed to the family at www.tomblynfuneralhome.com.

The family of Custer Stratton "Strat" Ogden Jr. created this Life Tributes page to make it easy to share your memories.