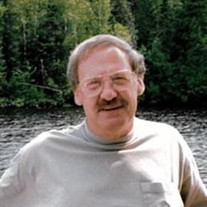 Delmas Grant “Del” Cogar, age 74 years, a resident of Elkins passed away Sunday, February 11, 2018 at 8:30 pm at his home with his loving wife, Brenda and his caretakers at his side. He was born October 6, 1943 at Jumbo, WV, Webster County, the youngest son of Lloyd “Jake” and Biddy Cogar. He is survived by his wife, Brenda, one brother, Donald (Marge) Cogar, two sisters, Mardell Kline at Colonial Place, Elkins and Leota Parsons of Cleveland, OH and sister-in-law, Betty Cogar of Baltimore, MD. Also surviving are several nieces and nephews, including a special niece, Dana Roy Burke and husband Zach of Bowden, and several great nieces and great nephews. Also preceding him in death was one brother, Garnet Cogar, sisters, Louise Wright, Katrina Darby, Doris Watkins, Neva Sears, and Ann Achee, nephew Mike Sears and niece Linda Carpenter. Delmas was a graduate of Webster County High School and a 1962 graduate of Glenville State College. He served his country in the United States Army during the Vietnam Era with his Tour of Duty in Vietnam. He returned home and worked for the WV Department of Human Services for thirty four years in Webster and Upshur Counties. He was first married to Sharon Bunner Wright and always considered the Bunner family, not only his friends, but his second family. Del enjoyed spending time with his friends and hunting and fishing were his top two pleasures. Ranking high on his list also was music; he loved music of all genres and could play any chord to any song he heard on his omnichord and often did just that. He particularly loved Johnny Cochran music and was an avid supporter of Johnny as a friend and loved to hear him play. After Del became bedfast, Johnny would stop by and play him some music on his violin. He had many, many friends, but some that spent time with him and catered to his whims were Donnie Wills, early on, the hunting and fishing trips he would talk about. He thought of Don more like a brother than a friend. Bill Umbright, who would take Del on road trips, fishing for an afternoon and after Del became homebound, Bill visited him quite often and would spend quality time with him just talking. There are many other people that shared in Del’s life and deserves to be mentioned, to those we say “thanks”. He also enjoyed flying kites and tinkering with anything. He was a man with very high standards and many interests. He was one that you could count on and who never met a stranger. He will be missed by all who knew him. Friends may call from 6:00 pm until 8:00 pm Thursday, February 15, 2018 at the Tomblyn Funeral Home in Elkins. A funeral service will be at 11:00 am Friday, February 16th from the funeral home chapel with Kent Price, Minister officiating. Interment will follow at Mountain State Memorial Gardens near Gilman where full military rites will be accorded by members of the WV National Guard Honor Guard Program, HW Daniels Post 29, American Legion and Tygart Valley Post 3467, Veterans of Foreign Wars. Memorial contributions may be made to the Randolph County Humane Society, P. O. Box 785, Elkins, WV 26241 in memory of Delmar. The Tomblyn Funeral Home of Elkins is in charge of the arrangements for Delmas Grant “Del” Cogar. Condolences may be expressed to the family at www.tomblynfuneralhome.com.

The family of Delmas G. Cogar created this Life Tributes page to make it easy to share your memories.