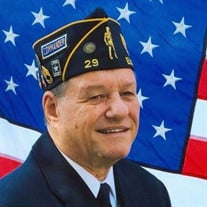 Dennis E. Calain, Sr., age 66 years, a resident of Elkins, passed away Friday, November 17, 2017 in the Ruby Memorial Hospital at Morgantown, WV. He was born August 14, 1951 in Queens, NY, a son of the late George L. Calain, Jr. and Stella Zahra Calain. He was married to the love of his life Patricia “Pat” Anson Calain who survives. Also surviving are two sons, Dennis E. “JR” Calain, Jr. and wife Crystal of Temecula, CA and Dr. Kenneth S. Calain and wife Manda of Unicoi, TN and one daughter, Kathleen “Kathie” Staten and husband Danny of Elkins. Grandchildren, Matthew, Christian, Hunter, David, Elizabeth and fiancé’ Zachary, Alexis, Jaelynn, Dalton, Bryce, Alex, Owen, Leslie, Tori and Joel and one great granddaughter, Riley Claire. Also preceding him in death was one brother, Tom Calain. Dennis graduated from Davis & Elkins College with a Bachelor of Science Degree in Business and a Minor in History. His career was with the Military having served forty one years; thirty and a half of those years were with the United States Naval Reserve and ten and a half with the Army National Guard. Over the years, he had the honor of presenting over four hundred American flags to bereaved families. He had also worked at Morgan Towing in New York City for fourteen years, at Mountaineer Motor and also at the Elkins Mountain School. He was a member of HW Daniels Post 29 American Legion where he was Past Commander, a life member of the Vietnam Veterans Association and was involved with baseball, scouting and Elkins High School Athletics. He was a member of the Holy Trinity Lutheran Church of Elkins. Friends may call from 5:00 pm until 8:00 pm Friday, November 24, 2017 at the Tomblyn Funeral Home in Elkins. A funeral service will be held at 11:00 am Saturday, November 25, 2017 from the funeral home chapel with Charles Ranew, Commander of HW Daniels Post 29 American Legion officiating. Interment will follow at the Calain Family Cemetery at Bowden. Full military honors will be accorded by members of the WV National Guard Honor Guard Program, HW Daniels Post 29, American Legion and Tygart Valley Post 3647 Veterans of Foreign Wars. The family suggests that memorial contributions be made to American Legion Post #29, WV Boy’s State, In Honor of Dennis Calain, Sr., 326 Railroad Avenue, Elkins, WV 26241. The Tomblyn Funeral Home of Elkins is in charge of the arrangements for Dennis E. Calain, Sr. Condolences may be expressed to the family at www.tomblynfuneralhome.com.

The family of Dennis E. Calain, Sr. created this Life Tributes page to make it easy to share your memories.