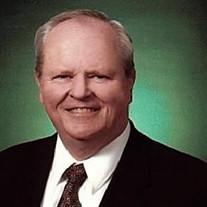 Denver R. Barnett, Jr., age 75 years, a resident of Elkins, passed away Monday morning, October 15, 2018. He was born at Sutton, WV, a son of Rose Amos Barnett of Elkins and the late Denver R. Barnett. At Ravenswood, WV, he was married to Jean Turner who survives and had been married for over fifty years. Also surviving are one son, Sean R. Barnett and wife Denise of Buckhannon and one daughter, Heather Withrow and husband Shawn of Elkins. One brother, Robert Barnett of Weston, WV, one sister, Linda Ashby of Fairmont, WV and two grandchildren also survive. Denver was a Veteran of the United States Army and served during the Vietnam War having received numerous decorations, medals, badges and ribbons. He was also a member of the Army Reserves and served during Operation Desert Shield/Desert Storm. He graduated with two Masters Degrees and was retired from the Randolph County Board of Education where he worked as a band director and guidance counselor. Later he was the Director of the Randolph County Development Authority. Denver was a train enthusiast and was a member of the WV Railroad Museum. He was a member of the Elkins Rotary Club, Kairos Prison Ministry, and Boy Scout Volunteer and was a talented photographer, father, husband, grandfather and friend. He was a member and former trustee of the First United Methodist Church in Elkins. Friends may call from 6:00 pm until 8:00 pm Thursday, October 18, 2018 at the Tomblyn Funeral Home in Elkins. A funeral service will be held at 11:00 am Friday, October 19th from the funeral home chapel with Rev. Brian L. Seders and Rev. Tim Turner officiating. Interment will follow in the American Legion’s Little Arlington Cemetery in Elkins where full military honors will be accorded by members of the West Virginia National Guard Honor Guard Program, HW Daniels Post 29 American Legion and Tygart Valley Post 3647 Veterans of Foreign Wars. The family suggests that memorial contributions may be made to the First United Methodist Church, 315 Kerens Avenue, Elkins, WV 26241 or the West Virginia Railroad Museum, P. O. Box 203, Elkins, WV 26241 in memory of Denver. The Tomblyn Funeral Home of Elkins is in charge of the arrangements for Denver R. Barnett, Jr. Condolences may be expressed to the family at www.tomblynfuneralhome.com.

Denver R. Barnett, Jr., age 75 years, a resident of Elkins, passed away Monday morning, October 15, 2018. He was born at Sutton, WV, a son of Rose Amos Barnett of Elkins and the late Denver R. Barnett. At Ravenswood, WV, he was married to... View Obituary & Service Information

The family of Denver R. Barnett, Jr. created this Life Tributes page to make it easy to share your memories.