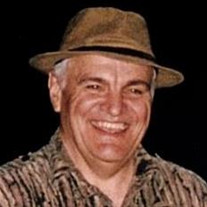 Mr. Donald Phares, age 75 years, a resident of Elkins, passed away peacefully Saturday, May 6, 2017 in the Ruby Memorial Hospital in Morgantown. He was born August 5, 1941 in Elkins a son of the late Paul Phares and the late Pauline Tallman Phares. On June 12, 1964 he was united in marriage to the former Camille Marstiller who survives. They celebrated fifty two years of marriage. Also surviving is one daughter, Missy Marple and husband Jim of Parsons, WV and a sister, Judy Jones and husband Bill of Lewisburg, WV. Don was blessed to have a great friend and neighbor, Ben Auvil whom he loved like a son. Ben’s children Kayla and Benjamin brought much joy and happiness to Don’s life and without Kayla’s help, Don would not have been able to have a garden the past two years. In addition to his parents, he was preceded in death by his beloved son, Michael James Phares on June 13, 2008. Don graduated from Elkins High School with the Class of 1960. He then graduated from West Virginia University in 1964 with a degree in Wildlife Management. He obtained a Master’s Degree in Fisheries Biology in 1975. Don was employed by the West Virginia Department of Natural Resources for thirty eight years as a Fisheries Biologist. He served as District Biologist, National Forest Biologist and in 1979, became Assistant Chief of Coldwater Fisheries Management. Don’s passion was West Virginia’s native brook trout and the protection of their habitat was of paramount importance to him. He was proud of his part in continuing and expanding upon Pete Zurbuch’s pioneering work in acid stream neutralization which restored hundreds of miles of trout streams in West Virginia. For streams not capable of sustaining a native brook trout population, Don was an advocate and enthusiastic participant in brown trout fingerling stockings. This was often in the form of back-packing and mule-packing fingerlings into otherwise inaccessible streams. Don worked on may stream improvement projects to better water quality for the fishery. This included building K-damns, bank stabilization, stream cover and boulder placements. Don and his co-workers, and Jack, Jim and Al surveyed inaccessible streams walking into wilderness areas carrying generators on their backs. Don had a special interest in the trout stocking program always wanting to provide additional fishing opportunities for anglers. He worked closely with the hatchery personnel to produce the maximum numbers of quality trout. Don supervised the trout programs with passion, zeal and efficiency that might not have been appreciated or fully understood until he left the program. His ability to spend so much time away from the office was the trust he had in his secretary, Dottie Arbogast. Don was awarded the Silver Trout Award from Trout Unlimited. Health issues required him to take a less strenuous job and he was responsible for the Wildlife Diversity Program. He enjoyed the job as it encompassed everything considered “Non-Game”. He became an enthusiastic mushroom hunter and was especially proud of his role in supporting the publication “Mushrooms of West Virginia and the Appalachia’s” by Bill Roady. Don truly loved his job so much that he felt he never worked a day, but was fortunate to enjoy each day making West Virginia a better place to call home. Don was a member of the Mountaineer Chapter of the Izaac Walton League. He served as President several times and was a long time Board Member. He especially enjoyed the youth programs and in particular, the 5th grade Environmental Days and Jake’s Days. He was most proud of the Mountaineer Chapter hosting the first “Hooked on Fishing, Not on Drugs” event in Randolph County. Don loved to laugh and to make those around him laugh. His friends were always welcome at his cabin which served as a perfect spot for fishing and hunting adventures, delicious food, epic story-telling and as he said, “Just Dumbin Around”. Don and Camille enjoyed years of antique collecting, restoring old furniture and the most fun of all, and digging for old glass bottles. Their most enjoyable times together were sharing simple rides in the mountains, or sitting together in the woods behind their home. In honor of his son, Michael, Don was an avid supporter of Elkins High School, Babe Ruth and Little League Baseball programs. He was happy that the new baseball complex at Elkins High School is nearing completion and a batting cage is being built. Don’s request for cremation will be honored and a Celebration of his Life will be announced at a later date. Memorial contributions may be made to Elkins High School Boosters, Inc., PO Box 28, Elkins, WV 26241 in memory of Don. The Tomblyn Funeral Home of Elkins is in charge of the arrangements for Donald Paul Phares. Condolences may be expressed to the family at www.tomblynfuneralhome.com.

Mr. Donald Phares, age 75 years, a resident of Elkins, passed away peacefully Saturday, May 6, 2017 in the Ruby Memorial Hospital in Morgantown. He was born August 5, 1941 in Elkins a son of the late Paul Phares and the late Pauline Tallman... View Obituary & Service Information

The family of Donald Paul Phares created this Life Tributes page to make it easy to share your memories.