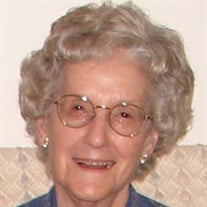 Doris Jean Luzader, nee Bolyard was born on December 8, 1922 to Josephine Belle (DeMoss) Bolyard and Charles Troy Bolyard of Grafton, WV. Doris Jean grew up in Grafton attending local elementary schools and graduating from Grafton High School in 1940. She attended the First United Brethren (later E.U.B.) Church where she met her future husband John Frank Luzader, the son of the church’s pastor The Reverend Lois R. Luzader. She graduated Magna Cum Laude from Salem College in 1944 and taught science and Latin at Rowlesburg High School until January 9, 1945 when she married Private 1st. Class John F. Luzader upon his return from the European Theater of War. Over the next several years, Doris Jean and John Frank lived in Austin and San Antonio, TX; Salem, WV; Hampton and Manassas, VA; Sharpsburg, MD; Cambridge and Schuylerville, NY, and Golden, CO. Upon moving to a new community, Doris Jean would become actively involved in the music ministry of the local Episcopal Church serving as organist and choir director. She gave private music lessons in her homes in Virginia and in Colorado giving many young people their first instruction in piano and organ. She pursued a Master’s Degree in Music Education at American University. She taught high school science and Latin and elementary school in Virginia. The Luzaders enjoyed traveling and visiting historic sites, particularly in Europe. While living in scenic Colorado, Doris Jean became an amateur photographer. Wherever she lived and traveled, Doris Jean was a proud West Virginian and never missed an opportunity to extol the virtues of her home state. She and John Frank moved to Bridgeport, WV in April 2005 where she resided prior to moving to Colonial Place in Elkins in 2015. She was preceded in death by her brothers: Charles Dana Bolyard, Roy Vance Bolyard, John Kenneth Bolyard, her sister Opal Elizabeth Heffner and by her husband John Frank Luzader. She is survived by her children: Alice C. Cade (Jay) of Woodbridge, VA, John C.F. Luzader (Lynda) of Loveland. CO and David M.C. Luzader of Cheyenne, WY and by grandchildren: Shannon Mills, Heather Petersen and Jennifer Luzader-Umbach. She is also survived by eight great grandchildren and by several nieces and nephews. A funeral service will be held at 10:00 am Tuesday, October 12, 2021 at the Grace Episcopal Church in Elkins. Interment will follow, alongside her husband, at the West Virginia National Cemetery near Pruntytown, WV. Masks and social distancing are recommended for those attending the service. Memorial contributions may be made to the Elkins High School Music Department, 100 Kennedy Drive, Elkins, WV 26241 in memory of Mrs. Luzader. The Tomblyn Funeral Home of Elkins is in charge of the arrangements for Doris Jean Luzader. Condolences may be expressed to the family at www.tomblynfuneralhome.com.

The family of Doris Luzader created this Life Tributes page to make it easy to share your memories.