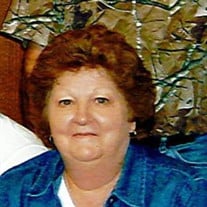 Doris “Jeanie” Poling, 72, a resident of Norton, passed from this life on Wednesday, December 15, 2021. Jeanie was born on April 20, 1949, in Cassity, a daughter of the late John and Goldie Abel. She was married to Doyle “Junior” Poling on December 18, 1972, in Oakland, Maryland. They had one son, Michael “Mikie” Poling. Both preceded her in death. She is also preceded in death by three brothers, David Abel, Charles Abel and Johnny Abel; two sisters Geneva Green, Shirley Abel; nephew Phil Green and niece Tammy Primavero Arbogast. Left to cherish her memory is her sisters, Mary Roy of Elkins, Linda Bodkin and husband, Johnny of Elkins, Dottie Primavero and husband Gino of Coalton, Nancy Kirk and husband Dave of Tennessee, one brother, Tom Abel and wife Donna of Newton Falls, Ohio, one sister-in-law, Kay Abel of Coalton; several nieces and nephews including a special nephew Frankie Edmond of Mabie. Also left to cherish her memory is her girlfriends and special neighbors Wes and Morgan Elmore and their five children. Jean always had snacks and candy ready for the neighborhood kids. She will also be missed by her dog, Sadie. Jeanie attended Coalton Schools and was employed at G.C. Murphy Company and Walmart. She enjoyed watching the WVU Mountaineers on tv and taking four-wheeler rides on back roads. She also enjoyed her trips to the Amish country with her special buddies; Debbie W., Carm, and Debbie Rowan and Sunday Bingo with the “Golden Girls”. Jean always looked forward to Tuesday Night’s Meals on wheels where everyone gathered to enjoy a meal and special times. We can all take comfort knowing that Jean is reunited with Junior and Mikie and her family is complete again. Friends will be received Monday, December 20, from 1:00-3:00 pm at the Tomblyn Funeral Home in Elkins. A brief service will be held at 3:00 pm and cremation will follow. Masks and social distancing are recommended for anyone attending the service. The Tomblyn Funeral Home of Elkins is in charge of the arrangements for Doris “Jeanie” Poling. Condolences may be expressed to the family at www.tomblynfuneralhome.com.

The family of Doris "Jeanie" Poling created this Life Tributes page to make it easy to share your memories.