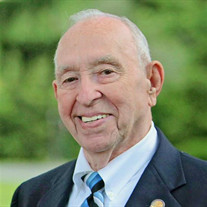 Edgar B. Stalnaker passed away unexpectedly on February 21, 2017 in Memphis, Tennessee. He was born June 4, 1926 in Monterville, West Virginia, the son of the late George Cameron and Icie Simmons Stalnaker of Mill Creek, West Virginia. Ed graduated from Tygart Valley High School in 1943. Ed served in the U. S. Navy from 1944 through 1946. After being honorably discharged with the rank of Watertender Third Class from the Navy he attended West Virginia University where he received a Bachelor of Science Degree in 1949. He was a member of Sigma Nu Fraternity. On December 20, 1947, he married Edna Jean Ferrell who preceded him in death on March 17, 2011. In 1950 Ed was employed by Agrico Chemical Company. He retired as National Sales Manager in 1982. After retiring, Ed and Eddie moved back to Mill Creek. Ed quickly became involved in the Mill Creek community in various roles: Mayor of Mill Creek for four years; President of Valley Health Care; Elder and Trustee of Mill Creek Presbyterian Church and President of the Stalnaker Family Association for 24 years. He was also a member of the Beni Kedem Temple, Masonic Lodge No. 55, the Tygart Valley Shrine Club, Tygart Valley Lions Club and the Elks. He was Project Manager for the restoration and preservation of the Jacob Stalnaker cabin (circa 1795) which was moved from the original location to its present site in Beverly, WV—a labor of love lasting almost 20 years. He is survived by his sisters Frances Stotler and Mildred Harmon, his son Ken Stalnaker (Beth), daughters Karen Haynes (Rick), Nancy Bundy (Peter), Jody Williams (Paul) and seven grandchildren. Also preceding him in death was one sister Alberta Jackson. Friends may call from 10:00 a.m. until 12:00 p.m. Friday, March 17, 2017 at the Tomblyn Funeral Home in Elkins. A funeral service will be held at 12:00 p.m. Friday, March 17th from the funeral home chapel with Rev. Dr. Basil A. Hensley officiating. Interment will follow in the Elkins Memorial Gardens. Full military honors will be accorded at the gravesite by the United States Navy, H.W. Daniels Post 29 American Legion and Tygart Valley Post 3647 Veterans of Foreign Wars. Randolph Lodge No. 55 AF and AM will conduct Masonic graveside rites. In lieu of flowers, donations in Ed’s memory may be made to the Alzheimer’s Association 713 S. Mendenhall Road Memphis, TN 38117 (901)-565-0011. The Tomblyn Funeral Home of Elkins is in charge of the arrangements for Edgar B. Stalnaker. Condolences may be expressed to the family at www.tomblynfuneralhome.com.

Edgar B. Stalnaker passed away unexpectedly on February 21, 2017 in Memphis, Tennessee. He was born June 4, 1926 in Monterville, West Virginia, the son of the late George Cameron and Icie Simmons Stalnaker of Mill Creek, West Virginia. Ed... View Obituary & Service Information

The family of Edgar B. Stalnaker created this Life Tributes page to make it easy to share your memories.

Edgar B. Stalnaker passed away unexpectedly on February 21, 2017...