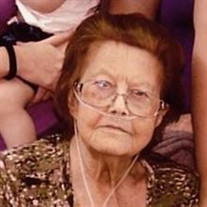 Edna E. Howard McCartney Harlan, age 81 years, a resident of Elkins, passed away Monday, August 27, 2018 at the Good Samaritan in Belington, WV. She was born on September 30, 1936 in West Virginia, a daughter of the late Henry and Gladys Whittke Howard. She was married to Clyde McCartney who survives, then later married the late Robert “Johnny” Harlan. Edna has three children, Debbie Jones and fiancé’ Ronald Dyer (Edna’s cook, chef and buddy) of Elkins, Ricky McCartney and wife Marie of NC and Billy Howard of TX. She also raised her nephew from an infant, Eugene Riffe who preceded her in death. She also has six grandchildren, Dustin McCartney of Elkins, Kendra Markley of Fairmont, WV, Shawn Jones of VA, Russell McCartney and wife Kellie of TN and Mackenzie Howard of TX and two great grandchildren, Melody Drain of Fairmont and Reid Layton McCartney of TN. Surviving also are several step children, step grandchildren and step great grandchildren, all that she loved very much. One sister, Pauline England of Ohio and two very dear friends, Roy and Lois Waybright whom were not just her dear friends, they were like her kids as well. Two grand fur babies, Stinch and Farrah that sat with her at night and ate with her. Also preceding her in death were one grandson, Michael McCartney, sisters, Dorothy McCartney, Lucille England, Alberta Riffe and Waneda Howard and her brothers Martin Howard, Waldon Howard and Elmer Howard. She loved to cook, bake, decorate cakes, and make crafts, bowl, ride four wheelers, plant and work in her garden. More recently she loved to go to the Senior Center and eat lunch and visit with friends. Edna had worked at Kmart prior to her retirement and had also previously worked at Ye Olde Donut Shoppe, Sissi’s Restaurant in Beverly, Nella’s, Hardee’s and Scottie’s, where she was a cook/waitress. She loved to help people in any way she could. Friends may call from 6:00 pm until 8:00 pm Wednesday at the Tomblyn Funeral Home in Elkins. A funeral service will be held at 11:00 am Thursday, August 30th from the funeral home chapel with Pastor Terry Cannon and Rev. Roy Waybright will officiate. Interment will follow in the Phillips Cemetery at Jimtown. The Tomblyn Funeral Home of Elkins is in charge of the arrangements for Edna E. Howard McCartney Harlan. Condolences may be expressed to the family at www.tomblynfuneralhome.com.

Edna E. Howard McCartney Harlan, age 81 years, a resident of Elkins, passed away Monday, August 27, 2018 at the Good Samaritan in Belington, WV. She was born on September 30, 1936 in West Virginia, a daughter of the late Henry and Gladys Whittke... View Obituary & Service Information

The family of Edna E. Harlan created this Life Tributes page to make it easy to share your memories.