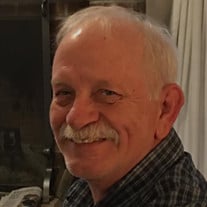 Edward L. “Ed” Bartlett, age 65 years, a native of Montrose and a resident of Hurricane, WV for many years, passed away Wednesday, March 15, 2017 at his home. He was born April 9, 1951 in Elkins a son of John Bartlett of Montrose and the late Beulah M. “Bob” Bartlett. He is survived by one son, Joshua Bartlett and Amanda Capannola of Knoxville, TN; one daughter, Elizabeth Bartlett and Jeromy Mynes of Altamonte Springs, FL and his life partner Debra Joyce, her three children, Kelly, Ashley and Brent and her three grandchildren. Also surviving are three brothers, Rex Bartlett and Cheryl, Jane Lew, WV, Alvin Bartlett and Ann and Jim Bartlett and Sherry all of Montrose, WV; four sisters, Sharon Bedford and Charles, Montrose, WV, Betsy Arbogast and Jim, Durbin, WV, Charlotte Parsons and Mark, St. George, WV and Barbara Miller and Howard “Chip” of Montrose, WV and several nieces and nephews. In addition to his mother, he was preceded in death by one brother, Mark David Bartlett. Ed was a graduate of Elkins High School and a graduate of West Virginia University with a Bachelor of Science in Civil Engineering. He was employed as a Civil Engineer for many years by Union Carbide and Dow before retiring to work as a consultant for CDI Corporation. Friends may call from 6:00 pm until 8:00 pm Sunday, March 19, 2017 at the Tomblyn Funeral Home in Elkins. A funeral service will be held at 1:00 pm Monday, March 20th from the funeral home chapel with Pastor David Fisher officiating. Interment will follow in the Montrose Primitive Baptist Cemetery. Memorial contributions may be made to Kanawha Hospice Care, 1606 Kanawha Blvd. W, Charleston, WV 25387 in memory of Ed. The Tomblyn Funeral Home of Elkins is in charge of the arrangements for Edward L. “Ed” Bartlett. Condolences may be expressed to the family at www.tomblynfuneralhome.com.

The family of Edward L. "Ed" Bartlett created this Life Tributes page to make it easy to share your memories.