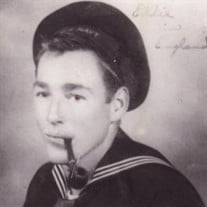 Edward S. Hutchison, Jr., beloved father, grandfather, great grandfather, uncle, and friend, passed away unexpectedly at his home in Wilmington, NC, on November 10, 2017. Ed, fondly known to all as Pap, was born on September 26th, 1923, in Houtzdale, PA, to Edward S. and Zillah Hutchison. He grew up with several siblings who’ve all preceded him in death. He married the love of his life, the former Helen R. Purkey, on October 16, 1948, and together they raised five children in their hometown of Elkins, WV, before moving to North Carolina in 1984. His surviving children are Steven M. Hutchison and wife Chris, of Wilmington, NC, David S. Hutchison and friend, Linda Schaper, of Marshville, NC, Barbara H. Combs, Nancy H. Fahey and husband, David, all of Wilmington, NC. Also surviving are his six grandchildren, Brian Hutchison and friend, Melissa, Kate Douglas, Nathan Zirkle, Scott Hutchison and wife, Ashley, Aaron Hutchison and wife, Stacy, and Edward “CJ” Fahey, all of NC, and Kristal Osborn and husband, Jonathan, of TN. Pap was blessed with nine great grandchildren, Jenna Douglas, Marshall Hall, Bryce Hutchison, Andrew S. Hutchison, Austyn, Madyson, and Taylor Ossmann, all of NC, and Hannah and Maelynn Osborn of TN. Ed was predeceased by his wife, Helen R. Hutchison, and youngest son, Mark Edward Hutchison. He so adored his entire family and loved nothing more than spending time with them. In June of 1943, Ed proudly enlisted in the US Navy during WWII serving in several theaters of war. He was an LCVP landing craft operator, landing troops on the beaches of Normandy, France, during the D-Day Invasion, June 6, 1944. Ed’s many accomplishments include being a founding member of the Mountaineer Chapter of the Izaac Walton League in Elkins, and an active member of the Randolph County Beekeepers Association. He served as an Elkins City Councilman during the 1970’s, and was an honorary member of the American Chestnut Foundation. Throughout his entire lifetime, he was an avid conservationist, hunter, beekeeper, fisherman, and outdoorsman. Ed was a jack of all trades, and a master of everything! Pap maintained a zest for life and a wicked sense of humor. He was truly loved by everyone he met, and will be missed more than words can say. A visitation will be held from 5:00 pm until 6:00 pm Friday, November 17, 2017 at the Tomblyn Funeral Home in Elkins. At 6:00 pm Friday, Mr. Hutchison’s casket will be closed and the family will receive friends from 6:00 pm until 8:00 pm Friday. A funeral service will be held at 11:00 am Saturday from the funeral home chapel with Rev. Dr. Basil A. Hensley officiating. Interment will follow in the Mountain State Memorial Gardens near Gilman. Military honors will be accorded at the gravesite by members of the United States Navy, H.W. Daniels Post 29 American Legion and Tygart Valley Post 3647 Veterans of Foreign Wars. In lieu of flowers, the family is requesting memorial donations be made to the Mark Hutchison/David Cosner Scholarship Fund through the Tucker Community Foundation. Donations may be sent to: Tucker Community Foundation, PO Box 491, Parson, WV, 26287 Or Online at: tuckercommunityfoundation.net (Mark Hutchison/David Cosner Scholarship Fund) A reception will follow the graveside service at the Isaac Jackson Hotel, 830 Harrison Ave., Elkins, WV. The family is planning A Celebration of Life in honor of Ed in Wilmington, NC, at a later date.

Edward S. Hutchison, Jr., beloved father, grandfather, great grandfather, uncle, and friend, passed away unexpectedly at his home in Wilmington, NC, on November 10, 2017. Ed, fondly known to all as Pap, was born on September 26th, 1923, in... View Obituary & Service Information

The family of Edward Scott Hutchison Jr. created this Life Tributes page to make it easy to share your memories.