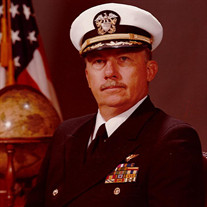 Captain Edward “John” Thaubald, III, age 88 years, passed away peacefully Thursday, February 18, 2021 in the hometown he loved, Elkins, West Virginia. He was born March 16, 1932 at Elkins, a son of the late Edward John Thaubald, II and Pearl Kuh Thaubald. He was formerly married to the late Muriel Lee Thaubald. In November, 2005 he was married to Dorothy Ann Mero who preceded him in death April 10, 2016. He is survived by two sons, Edward John IV (Nancy) of Locust Grove, GA and William Lee (Stephannie) of Duluth, GA, a daughter, Jamie Rush (Tim) of Fayetteville, GA and two grandchildren, Avery and Owen. He was a 30 year career US Navy Pilot with numerous commendations and flew 2 tours in the Vietnam War. He was always ready to tell a story or 5. He shared his love of competition in playing cards and games, bridge, cribbage, hearts, backgammon, tennis, racquetball, and golf. He enjoyed being a late in life Grandpa. He was a West Virginia boy at heart, he loved fishing, flying and snowbirding in Myrtle Beach with lifelong friends. He will be missed dearly. A graveside service will be held at 11:00 am Friday, February 26, 2021 at the Maplewood Cemetery. Pastor Julie Davis will officiate. Full military honors will be accorded at the gravesite by members of the United States Navy, H.W. Daniels Post 29 American Legion and Tygart Valley Post 3647 Veterans of Foreign Wars. Masks and social distancing is recommended for those attending the service. The family requests in lieu of flowers, donations be made to www.taps.org/support to support military families, TAPS, 3033 Wilson Blvd, Third Floor, Arlington, VA 22201. The Tomblyn Funeral Home of Elkins is in charge of the arrangements for Captain Edward John Thaubald, III. Condolences may be expressed to the family at www.tomblynfuneralhome.com.

The family of Edward John Thaubald III created this Life Tributes page to make it easy to share your memories.