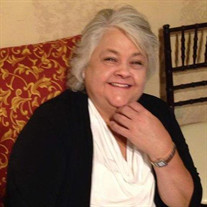 Ellen Joyce (Chamberlain) Lanham age 68 of Elkins, WV, went home to be with the Lord on Friday December 13, 2019. She was born on August 24, 1951 in Elkins, WV to the late Raymond L. Chamberlain and Mary L. (Champ) Chamberlain. She graduated from Elkins High School in 1969. Her greatest joy in life was spending time with her family, especially her grandchildren. Her determination and strength were two of her greatest assets in life. Her fighting spirit was an inspiration to all who knew her and loved her. She had a close group of friends since high school (69’ers) with whom she had many adventures. She was lucky number 13 of fourteen children. She faced every adversity in her life with a smile on her face. She was #badassgrandma. She is survived in death by her husband Arnett “Junie”; son Bradley; daughters Amy (Jaison) Radion and Kristin (Rick) Close; grandchildren Xander, Alexander, Mackenzie, Sophie, Hunter and Ellen. Her siblings Fern Kalm, June Welch, Mary (Joseph) Sterling, Carl Chamberlain, Judy (John) Mongan and Ross (Karen) Chamberlain, sisters-in-law Jean Chamberlain, Jonni Chamberlain, Emma Lou (Roy) Teets and Mary Mae (Don) Barnhart and numerous nieces and nephews also survive. She was preceded in death by her son Jeremy Alan; sisters Betty (Ted) Henline, Janet (Dale) Johnson, Carletta Chamberlain, Luella (Evan) Jenkins; brothers Raymond “Sonny” Chamberlain, Harold Chamberlain, Wilbert Chamberlain; brothers-in-law Walt Kalm, Perry Lanham, Sr., Richard Welch, Clifford Welch and Buddy (Louise) Vanscoy and her beloved dogs Tucker and Blue. Friends may call from 4:00 pm until 7:00 pm Friday, December 20, 2019 at the Tomblyn Funeral Home in Elkins. A funeral service will be held at 10:30 am Saturday at the funeral home chapel. Interment will follow in the Maplewood Cemetery. The Tomblyn Funeral Home of Elkins is in charge of the arrangements for Ellen Joyce (Chamberlain) Lanham. Condolences may be expressed to the family at www.tomblynfuneralhome.com.

Ellen Joyce (Chamberlain) Lanham age 68 of Elkins, WV, went home to be with the Lord on Friday December 13, 2019. She was born on August 24, 1951 in Elkins, WV to the late Raymond L. Chamberlain and Mary L. (Champ) Chamberlain. She graduated... View Obituary & Service Information

The family of Ellen Joyce Lanham created this Life Tributes page to make it easy to share your memories.