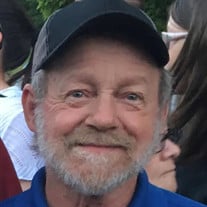 Elmer Ray “Sonny” Finlen, age 64 years, a resident of Huttonsville, passed away Monday evening, February 28, 2022 at this home, surrounded by his family, and under the care of West Virginia Caring Hospice. He was born November 14, 1957, a son of the late Elmer Richard Finlen and the late Ethel Mae Channell Finlen. On December 25, 1976, he was married to Barbara Ann Scott Finlen who survives at Huttonsville. Also surviving is one son, Eric Finlen and wife Julie, Huttonsville; one daughter, Tonya Sycafoose and husband Okey of Huttonsville; two sisters, Kathy Lanham and husband Buck of Mill Creek and Terry Butcher and husband Mike of Dailey. Seven grandchildren, Bailey, Cole and Damian Finlen, Parker and wife Catlyn, Ben, Chloe and boyfriend Nick and Zander Sycafoose and two great grandchildren, Paityn and Konnor Sycafoose also survive. Also preceding him in death in addition to his parents was one brother, Ronald Finlen and his father and mother-in-law, Virgil and “Tibby” Scott. Sonny attended the schools of Randolph County and was employed at Myles Lumber for thirty two years and Fox Lumber for two years prior to becoming disabled. He enjoyed all WVU Sports, Nascar, hunting and fishing. Friends may call from 11:00 am until 1:00 pm Saturday, March 5, 2022 at the Tomblyn Funeral Home in Elkins. A funeral service will be held at 1:00 pm Saturday from the funeral home chapel with Rev. Randy Long officiating. Interment will follow in the Brick Church Cemetery near Huttonsville. The Tomblyn Funeral Home of Elkins is in charge of the arrangements for Elmer Ray “Sonny” Finlen. Condolences may be expressed to the family at www.tomblynfuneralhome.com.

Elmer Ray &#8220;Sonny&#8221; Finlen, age 64 years, a resident of Huttonsville, passed away Monday evening, February 28, 2022 at this home, surrounded by his family, and under the care of West Virginia Caring Hospice. He was born November 14,... View Obituary & Service Information

The family of Elmer Ray "Sonny" Finlen created this Life Tributes page to make it easy to share your memories.