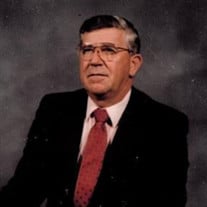 Elmer "Dink" Richard Jackson, 81, a resident of Chenoweth Creek road Elkins departed this life on Wednesday, October 7, 2020. His passing was following a period of declining health. He was born May 18, 1939 in Pocahontas County, West Virginia, a son of the late Walter Franklin and Lula Flossie Smith Jackson. He was a 1957 graduate of Marlinton High School after which he served in the U.S. Army. Left to cherish his memory is his loving wife Helen Jean Sparks who he married June 10th, 1961 and had just celebrated their 59th wedding anniversary. Also surviving are his daughter Deanna Dawn and her husband Bob Shepherd of Nashport, Ohio and two grandchildren, Jared Jackson of Elkins and Emily Wagner of Cumberland, Maryland. In addition he is survived by his three sisters, Evelyn Sparks (David) of Marlinton, Eleanor Hamrick (Clifford) of Valley Bend, and Betty Krumpe (Chuck) of Kinsman, OH, and many nieces and nephews. He is preceded in death by his five brothers Oris Jackson, Howard Jackson, Alfred Jackson, Guy Jackson, and Ward Jackson. Elmer was a loving and devoted husband, father, and grandfather. An upstanding member of the community and in 2000 had retired from Mon Power after 39 years of service. He is certain to be missed by family and friends. The family wants to give a special thanks to Amber Hinchman and the staff of Mountain Hospice for their care during his decline. Friends may call from 1:00 pm until 2:45 pm Monday, October 12, 2020 at the Tomblyn Funeral Home in Elkins. Social distancing and masks will be required during the visitation. Mr. Jackson will then be moved to the Elkins Memorial Gardens where a graveside service will be held at 3:00 pm. Pastor Jack Howell will officiate and interment will follow. In lieu of flowers the family request donations be made to Mountain Hospice, 1002 Crim Ave., Belington, WV or a charity of choice in memory of Mr. Jackson. The Tomblyn Funeral Home of Elkins is in charge of the arrangements for Elmer “Dink” Richard Jackson. Condolences may be expressed to the family at www.tomblynfuneralhome.com.

Elmer "Dink" Richard Jackson, 81, a resident of Chenoweth Creek road Elkins departed this life on Wednesday, October 7, 2020. His passing was following a period of declining health. He was born May 18, 1939 in Pocahontas County, West Virginia,... View Obituary & Service Information

The family of Elmer Richard Jackson created this Life Tributes page to make it easy to share your memories.