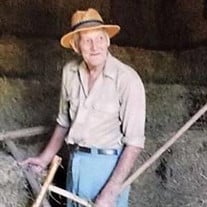 Mr. Elwood Koerner, age 90 years, a resident of Helvetia, passed away Friday, April 6, 2018. He was born, January 28, 1928 at Helvetia, a son of the late Paul Frederick Koerner and the late Myrtle Koerner. On February 6, 1954 in Elkins he was married to Shirley Jean Wilkins Koerner who preceded him in death April 9, 1980. Surviving are three sons, Chesley Koerner, Moorefield, WV, John Koerner, Nutter Fort, WV and Loren Koerner of Concord, NC. Three daughters, Arvela Koerner, Elkins, Ivy Summerfield, Mill Creek and Rozena Roth of Elkins; one sister, Theresa Maienknecht , Sardis, Oh; twelve grandchildren and four great grandchildren also survive. Also preceding him in death was one sister, Pauline Hensil and one brother, Morgan “Pete” Koerner. Mr. Koerner was a graduate of Pickens High School with the Class of 1946 and was a Veteran of the United States Army serving during the Korean War. He was employed as a Lumber Inspector for many years having retired from Ralph Harper Lumber Company. Although he worked in the Lumber Industry, farming was his passion. He was a lifelong member of the Zion Presbyterian Church at Helvetia. Friends may call from 6:00 pm until 8:00 PM Monday, April 9, 2018 at the Tomblyn Funeral Home in Elkins. On Tuesday, April 10th, he will be moved to the Zion Presbyterian Church at Helvetia for visitation from 1:00 pm until 2:00 pm the funeral hour. Mr. Koerner’s sons, Chesley, John and Loren will conduct the funeral service and interment will follow in the Pickens Cemetery. Presentation of the American Flag will be made at the gravesite by members of the West Virginia National Guard Honor Guard Program. Memorial contributions may be made to the Zion Presbyterian Church, PO Box 78, Helvetia, WV 26224 or to the Pickens Cemetery Association, PO Box 156, Pickens, WV 26230 in memory of Mr. Koerner. The Tomblyn Funeral Home of Elkins is in charge of the arrangements for Mr. Elwood Koerner. Condolences may be expressed to the family at www.tomblynfuneralhome.com.

Mr. Elwood Koerner, age 90 years, a resident of Helvetia, passed away Friday, April 6, 2018. He was born, January 28, 1928 at Helvetia, a son of the late Paul Frederick Koerner and the late Myrtle Koerner. On February 6, 1954 in Elkins he was... View Obituary & Service Information

The family of Elwood Koerner created this Life Tributes page to make it easy to share your memories.