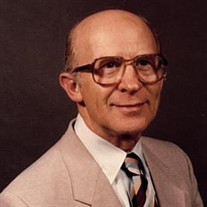 Mr. Emmett L. Lambert, age 99, a former resident of Centerville, OH and more recently a resident of Colonial Place in Elkins, WV, passed away Tuesday, September 17, 2019 at Colonial Place. He was born June 26, 1920 near Harman, WV a son of the late Mark Lambert and Perninie Smith Lambert. On August 1, 1941 in Deale, MD he was married to Ella Mae Smith Lambert, who preceded him in death April 18, 2016. Surviving is one daughter Keitha Wing and husband Dr. Larry Wing of Elkins; one brother, C. Kenneth Lambert of Mt. Vernon, OH; two sisters, Wilma Winter of Upper Sandusky, OH and Anna Weidemeyer and husband Marv of Mansfield, OH. Also surviving are two grandchildren, Barry Wing of Minneapolis, MN and Dr. Bret Wing and wife Sharon of Easton, PA and two great grandchildren, twins Ethan and Ella Wing of Easton, PA. Also preceding him in death were brothers Blake Lambert and wife Irene and Eric Lambert, brother-in-law F. Ned Winter and sister-in-law Margaret Lambert. Mr. Lambert attended the one room school on Rich Mountain and Harman High School. Following a few years as an ordained Assembly of God pastor, he enrolled in Davis & Elkins College and graduated cum laude in 1952. He later received a Master’s Degree from The Ohio State University. He entered the insurance business in Columbus, OH in 1952 and held positions with several companies in Columbus, OH; Louisville, KY; and Dayton, OH until his retirement from Guide One in 1985. He loved traveling and was especially fond of Arizona, and seriously considered moving there until grandchildren changed his priorities. Following his retirement from Guide One he accepted the volunteer position of Visitation Pastor at Kettering Assembly of God in Kettering, OH and served in this job for 25 years. He especially loved to visit the nursing homes and play his guitar and minister to the residents. Friends may call from 11:00 am to 1:00 pm September 21, 2019 at the Tomblyn Funeral Home in Elkins. A funeral service will follow at 1:00 pm in the funeral home chapel with Dr. Peter Vial officiating. Interment will take place on Monday September 23, 2019 at the Eastview Cemetery in Centerburg, OH. Memorial contributions may be made to Mountain Hospice, 1002 Crim Ave., Belington, WV 26250 or to Colonial Place, 301 Wilson Lane, Elkins, WV 26241 in memory of Mr. Lambert. The Tomblyn Funeral Home is in charge of the arrangements for Mr. Lambert. Condolences may be expressed to the family at www.tomblynfuneralhome.com.

Mr. Emmett L. Lambert, age 99, a former resident of Centerville, OH and more recently a resident of Colonial Place in Elkins, WV, passed away Tuesday, September 17, 2019 at Colonial Place. He was born June 26, 1920 near Harman, WV a son of... View Obituary & Service Information

The family of Emmett L. Lambert created this Life Tributes page to make it easy to share your memories.