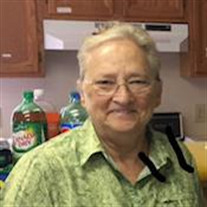 Ettie Blanche Grey, age 74 years, a resident of Valley Bend, passed away Monday, March 4, 2019 at Ruby Memorial Hospital in Morgantown, WV. She was born September 27, 1944 at Valley Bend, a daughter of the late Charles and Lela Markley Wegman. On June 16, 1968 at Huttonsville, she was married to Robert William Grey who preceded her in death March 12, 2007. She is survived by one son, Charles Edward Grey and wife Tonya of Elkins, two daughters, Tammy Rowan and husband Jake of Coalton and Roberta Grey of Elkins and four step-daughters, Sandra Rigby and Harry, Agnes Long and Junior, Mary Fox and Pat and Melissa Crosen and Dale. Four brothers, John Wegman and wife Sandy of Mill Creek, Rex Wegman and wife Sonya of Coalton, Stan Wegman of Beverly and Robert Wegman and wife Debbie of Valley Bend and one sister, Mary Miller and Tom Jones of Mill Creek; sixteen grandchildren, twenty seven great grandchildren with another great grandchild on the way and one great-great grandchild also survive. Also preceding her in death were five brothers, Franklin, Junior, Jim, William and Philip Wegman and one sister, Edith Byrd. Ettie was a graduate of Tygart Valley High School and had retired from the Elkins Mountain School where she was a cook. She was a member of the Ladies Auxiliary of the Tygart Valley Fire Department. Friends may call from 6:00 pm until 8:00 pm Friday, March 8, 2019 at the Tomblyn Funeral Home in Elkins. A funeral service will be held at 11:00 am Saturday from the funeral home chapel with Pastor Hal Boehm officiating. Interment will follow in the Mountain State Memorial Gardens near Gilman. The Tomblyn Funeral Home of Elkins is in charge of the arrangements for Ettie Blanche Grey. Condolences may be expressed to the family at www.tomblynfuneralhome.

The family of Ettie Blanche Grey created this Life Tributes page to make it easy to share your memories.