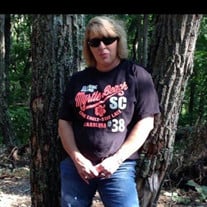 Frances M. Miller, age 46 years, a resident of Elkins, passed away Friday, January 4, 2019 at her home. She was born March 15, 1972 at Elkins, a daughter of Patricia Bennett of Jimtown and the late Michael D. Bennett. On August 28, 1993, she was married to Samuel “Sammy” Miller who survives. Also surviving is mother-in-law, Maureen Vera Miller of Elkins, one son, Thomas C. Miller of Huntington and three daughters, Samantha Collins, Stephanie Stromberg and Christina Miller, all of Elkins. One brother, Jonathon M. Bennett of Jimtown. Also surviving are four grandchildren, AJ, Waylon, Ashlynn, Evan and a grandchild on the way. Several nieces and nephews also survive. Also preceding her in death was her father-in-law, Samuel E. Miller and one granddaughter, Maddison Coffman. Frances was a graduate of Coalton High School and the Manager of the Dairy Queen of Elkins. She loved watching NASCAR, Demolition Derby, Dirt Track Racing and enjoyed crafting and hunting. Friends may call from 6:00 pm until 7:45 pm Thursday, January 10, 2019 at the Tomblyn Funeral Home in Elkins. At 7:45 pm Thursday, a service will be held with Pastor Dave Collins officiating. Cremation will follow. The Tomblyn Funeral Home of Elkins is in charge of the arrangements for Frances M. Miller. Condolences may be expressed to the family at www.tomblynfuneralhome.com.

The family of Frances Marie Miller created this Life Tributes page to make it easy to share your memories.