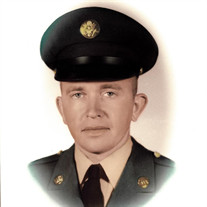 Frankie “Leroy” Davis, Sr., age 81 years, a resident of Harman, passed away Sunday, January 6, 2019. He was born October 8, 1937 in Dryfork, a son of the late Mary Jane White and the late George Davis. On November 29, 1961 he was married to Helen Ogden Shifflett Davis who survives. Also surviving is one son, Frankie Leroy Davis, Jr. and Deana of Harman; one daughter, Rosemary Davis Mullennex and husband Ron of Harman and one step son, Jack Shifflett and wife Becky of Elkins. Three grandchildren, Stacy Delawder and husband Jeff, Jeff Davis, and Jackie Shifflett and wife April and two great grandchildren, Jackson and Emma Shifflett also survive. Also preceding him in death was one brother, Thomas T. Teter, sister-in-law, Kathryn Teter and one special nephew, Keith Teter. Leroy was a Veteran of the United States Army having survived during the Cuban Crisis. He then worked as a mechanic for Midway Motor Company in Harman and then with the West Virginia Department of National Resources at Canaan Valley State Park until his retirement in August of 1999. He was a member of the Harman Volunteer Fire Department for over fifty years, the Fairfax Masonic Lodge No 174 of Thomas, Walter Chapter No. 43, Order of the Eastern Star and Pilgrim Commandery No. 21, Knights Templar. Pap loved his cats and dogs and was always working on tractors, cars and other mechanics. He was an avid outdoorsman who loved to garden and mow his lawn. Mr. Davis’s request for cremation has been honored. A memorial service will be held at 1:00 PM Saturday, January 12, 2019 at the Dryfork Assembly of God Church with Pastor Jerry Sebastian officiating. Memorial contributions may be made to the Harman Volunteer Fire Department, C/O Jerry Teter, P. O. Box 131, Harman, WV 26270 or to Mountain Hospice, 1002 Crim Avenue, Belington, WV 26250 in memory of Leroy. The Tomblyn Funeral Home of Elkins is in charge of the arrangements for Frankie “Leroy” Davis, Sr. Condolences may be expressed to the family at www.tomblynfuneralhome.com.

The family of Frankie Leroy Davis Sr. created this Life Tributes page to make it easy to share your memories.