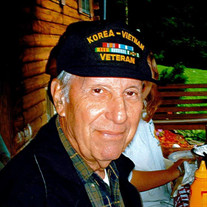 On 08/10/2021, God called home his good and faithful servant Mr. Galen Lee Gilmore. Mr. Gilmore was a resident of Mill Creek, WV. He was born on 10/21/1932 in Pocahontas County to the late George W. “Webb” Gilmore and Wilma Dilley Gilmore. On 08/31/1952 he married the love of his life Jerry Mae Corley Gilmore. They were married 62 years before she preceded him in death. In addition to his parents and his wife, Galen was preceded in death by brothers Ellis W. “Junior” Gilmore and Robert Keith Gilmore; children Tommy Lee, Ronald Norman, Marjorie Suzanne, and Lydia Carol Ann Gilmore; grandchildren Jeromy Lee Gilmore, Christopher Galen Gilmore, infant twins Joshua and Jason Summerfield, and son-in-law Michael Summerfield. He is survived by son Richard (Anita) Gilmore of Charleston, WV, and daughter Katherine “Kitty” Summerfield of Mill Creek, WV; foster children who he raised and loved as his own Ralph Plaugher, Anna Mollohan, Tina Hall, and Tabitha Villarico. Grandchildren: Michael Gilmore, Sabrina Gilmore, Cory Gilmore, Mallory Clay, Brittany Friel (who was also his devoted caretaker in his last years), JoAnna George, Deanna Thomas, BreAnna Summerfield, Brandon Summerfield, Michael Totten, Amanda Hines, Courtney Hall, Jarod Hall, Derrick Villarico, Stephen Plaugher, Faith Plaugher, and Abram Plaugher. Great-grandchildren: Aiden and Caleb Gilmore, Roland Gilmore, Cora and Gavin Gilmore, Jaxson and Landry Clay, Axel and Colton Pritt, Easton and Eli George, Aidan Hall, Blaine and Aubrey Hines, Jaden O’Brien, Makayla Totten, and Kenzie Chapin. Galen enlisted in the United States Air Force as a young man and proudly served his country. He and his growing family were stationed at many different bases throughout the country and in Panama and made life-long friends. His tour of duty included the time of the Cuban missile crisis when he served as part of the air tactical support team and was deployed in air waiting for instructions on the day the Russians backed down. He was discharged honorably (that’s how he lived his entire life) after 25 years of service when he retired and moved his family back home for good to Mill Creek. Upon returning home, he went to work at the Huttonsville Correctional Center until he retired a second time for good. His indomitable spirit was never more apparent than during the darkest days of his life when a fire destroyed their Mill Creek home and took the lives of three of their six children. Through his grief and out of the ashes, no one who lived in Mill Creek at the time will forget how he bought a house, cut it in half, and rolled it down the middle of the street to sit on the lot where the old house had stood. Nearly everyone in town turned out to help and/or watch. He did not want his wife coming out of the hospital to see an empty lot. That doesn’t even begin to scratch the surface of the kind of decent, hardworking, Christian man he was. If you met him even once, you could count him a friend for life. We shall miss him dearly but rejoice in the reunion he is having in heaven now with Jerry Mae and family members who have gone before. He was a long time member of the Mill Creek United Methodist Church. Visitation will be held from 12:00 pm until 2:00 pm Sunday, August 15, 2021 at the Tomblyn Funeral Home in Elkins. A funeral service will be held at 2:00 pm Sunday from the funeral home chapel with Pastor Todd Corley officiating. Final resting place will be in the Brick Church Cemetery, Huttonsville, WV. Full military honors will be accorded by members of the Joint Base Andrews Air Force Base, HW Daniels Post 29 American Legion and Tygart Valley Post 3647 Veterans of Foreign Wars. Memorial contributions may be made to the Mill Creek United Methodist Church, Mill Creek, WV 26280 in memory of Mr. Gilmore. The Tomblyn Funeral Home of Elkins is in charge of the arrangements for Galen Lee Gilmore. Condolences may be expressed to the family at www.tomblynfuneralhome.com. “I have fought a good fight. I have finished my course. I have kept the faith. Henceforth, there is laid up for me a crown of righteousness, which the Lord, the righteous judge, shall give me at that day; and not to me only, but to all them also that love His appearing.”

The family of Galen Lee Gilmore created this Life Tributes page to make it easy to share your memories.