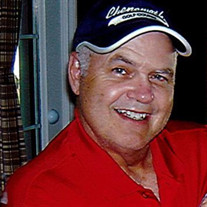 Gary L. Chenoweth, 70, a resident of the Chenoweth Creek Community, departed this life Wednesday, September 8, 2021. His death was attributed to natural causes, and was unexpected. Gary was born on Thursday, January 25, 1951, at Elkins, WV, to the late Clee B. "Bus" Chenoweth and Virginia Pearl Hinchman Chenoweth. Gary attended the one room school located at Chenoweth Creek, and graduated from Elkins High School with the class of 1969, where he excelled in football and track. Gary went on to attend Potomac State College and West Virginia University, where he earned a Bachelor's Degree in Marketing. After graduating from West Virginia University, Gary embarked on a career in the construction industry, working for local contractors, and also working for approximately a decade in, and around Woodbridge, VA. Gary eventually moved back to Elkins and began his own company, Chenoweth Builders, LLC, where he specialized in residential construction, In addition to operating his own construction business, Gary was a master builder and enjoyed building hand crafted furniture and built many family heirlooms left for his family and others to cherish. Upon retirement, Gary devoted his time to maintaining the family farm and spending time with his family, around whom his life revolved. Left to cherish his memory are his son, Robert C. Chenoweth; daughter-in-law, Misty D. Judy Chenoweth, and his 6 grandchildren, Jacob, Jillian, Eli, Elliott, Riley and Levi Chenoweth, whom all reside in Elkins, WV. Gary was formerly married to Joyce Royer Chenoweth, to whom he still remained close. Gary is also survived by his brother, Benjamin Chenoweth, and sister-in-law Sheila Mosely Chenoweth of Imamura, FL. Gary was preceded in death by his parents, and infant brother Roger C. Chenoweth. Gary's wishes for cremation and a graveside service will be honored, with a celebration to follow at a later date. In his memory, the family request contributions are made to a charity of choice in Gary’s memory. The Tomblyn Funeral Home has been entrusted for the services of Gary L. Chenoweth. Condolences may be expressed to the family at www.tomblynfuneralhome.com.

Gary L. Chenoweth, 70, a resident of the Chenoweth Creek Community, departed this life Wednesday, September 8, 2021. His death was attributed to natural causes, and was unexpected. Gary was born on Thursday, January 25, 1951, at Elkins, WV,... View Obituary & Service Information

The family of Gary L. Chenoweth created this Life Tributes page to make it easy to share your memories.

Gary L. Chenoweth, 70, a resident of the Chenoweth Creek Community,...