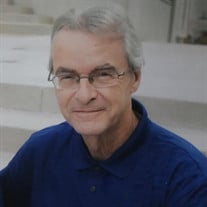 GARY LEE GRIFFITH, 73, of Evans, WV, passed away December 18, 2019 in Ripley, WV with his family by his side following a courageous battle with Alzeheimer’s disease. Gary, the son of the late Lester Franklin Griffith and Ora Etta Watson Griffith, was born in Elkins, WV, on December 29, 1945. On June 5, 1971, he was married to the former Lois Jean Belan in Elkins. Gary is survived by his wife Jean of Evans, son and daughter-in-law Craig and Kelly Griffith of Charleston, daughter and son-in-law Kara and Jeff Casto of Ripley; and six grandchildren: Elijah, Cyrus, Mya, and Ava Casto of Ripley, and Julia and Sydney Griffith of Charleston. He is also survived by his brother-in-law John Belan and his wife Corina (Pongie) of Elkins, sister-in-law Carris Griffith of Elkins, and brother-in-law Jerry Miller of Jimtown, WV, sister-in-law Dorothy Bennett as well as many nieces and nephews cousins and many friends. In addition to his parents, Gary was predeceased by his sisters Geneva Hines, Maxine Miller, and Evelyn “Sissy” Nelson; brothers Charles Griffith, Lester “Shorty” Griffith, Romie Griffith, and Roger Griffith; sisters-in-law Nancy Ellen Griffith and Nancy Lou Isner Griffith; brothers-in-law Joseph Hines and Mark Nelson; nephew Mark Griffith and half brother, Jimmy Bennett. Gary was a 1964 graduate of Elkins High School and served in the United States Air Force at McCoy Air Force Base in Orlando, Florida from 1964-1969, attaining the rank of Staff Sergeant and being named Airman of the Year at the base in 1969. Gary requested his honorable discharge several months after his younger brother Roger was killed in the Vietnam War, and he returned to Elkins where he worked at a men’s clothing store and met the love of his life, Jean. In 1971, Gary and Jean moved to Spencer, WV, where Gary managed a men’s clothing store. In 1975, Gary was named manager of Hardman’s hardware store in Ripley, and he remained with the company in various roles until his retirement in 2011. Gary greatly cherished his relationship with the Hardman family, and the feeling was mutual. Gary was very involved in the Ripley community, including as a member of the Ripley Jaycees, Lions Club and Ripley Chamber of Commerce. Gary was extremely proud of the accomplishments of his children, children-in-law, and grandchildren, and was a constant presence at their many activities. He took in more basketball games, dance recitals, softball and baseball games, track meets, and football games than one could count. His kids and grandkids were the light of his life, and nothing made him happier than seeing them happy and doing well. His kids liked to tease him about being tight with a dollar, but he never hesitated to help any family member out. Gary loved telling, and retelling, stories from his youth. Some favorites included the many odd jobs he did in high school to make ends meet, including working as a bellhop, pinsetter at a bowling alley, and newspaper delivery person. He especially got a kick out of the fact that he earned money watching Davis & Elkins basketball games and calling to report the box score to the Associated Press. Gary’s early years were not without challenges, but he looked back on his childhood fondly. His mother, Ora, essentially raised eight children on her own, and Gary never forgot her sacrifice and the love she showed her kids despite difficult circumstances. Gary also made a friend for life, the late David Varner, during his childhood that endured until David’s death in 2008, and some of Gary’s favorite stories were about Joseph’s Newsstand in Elkins, where he and David would hang out while Gary’s brother worked the newsstand. He developed a love of WVU athletics during the Jerry West years, and he loved telling tales about some of his all- time favorite athletes to his grandsons, including West, Hot Rod Hundley, Fritz Williams, and his man Larry Bird. After his retirement from Hardman’s, he greatly enjoyed catching lunch and a movie with Jean and their pals and former neighbors Roy and Linda Nuckles, and also enjoyed traveling, golfing, working out with Jean at the Ripley Fitness Center or Cedar Lakes, and mowing his yard until he was no longer physically able. The family will receive friends at the Waybright Funeral Home in Ripley on Sunday, December 22, 2019 from 12:00 pm until 2:00 pm. A celebration of Gary’s life will begin at 2:00 pm with Pastor Ben Riggleman officiating. Additional services will be held at 1:00 pm on Monday, December 23, 2019 at the Tomblyn Funeral Home, Elkins. The family will receive friends from 11:00 am until the time of service at the funeral home and interment will follow at the Mountain State Memorial Gardens in Gilman, WV. In lieu of flowers, memorial donations in Gary’s name may be made to the Ripley High School Athletic Boosters Club, Inc., 2 School Street, Ripley, WV 25271 or the West Virginia Chapter of the Alzheimer’s Association, 1601 2nd Avenue, Charleston, WV 25387.

GARY LEE GRIFFITH, 73, of Evans, WV, passed away December 18, 2019 in Ripley, WV with his family by his side following a courageous battle with Alzeheimer&#8217;s disease. Gary, the son of the late Lester Franklin Griffith and Ora Etta Watson... View Obituary & Service Information

The family of Gary Lee Griffith created this Life Tributes page to make it easy to share your memories.